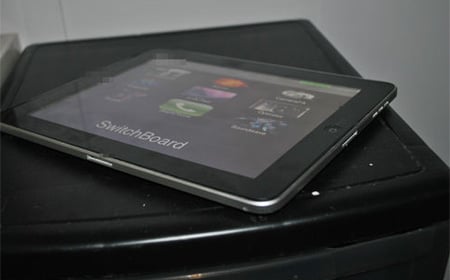 There’s evidence that Apple initially hardwired the first model of the iPad with dual dock connectors. And it comes from an eBay listing. Since its release in early 2010, the iPad has had just one dock connector which is oriented in portrait mode. But no one complained; it still flew off store shelves at an alarming rate.

This bit of news confirms a long-standing rumor that Apple considered putting two dock connectors into the first generation iPad, but ultimately scrapped the idea for whatever reason. Dug out by Mac Rumors, the listing is for a prototype version of the original 16GB iPad.

The sad news is that the listing doesn’t seem to be in tip-top condition; repairs are needed to its touch sensing screen. That takes away quite a bit from its capabilities, but that aside, it sports one dock connector on the side and one at the bottom. And the unreleased device also comes with Apple’s in-house diagnostic software tool called SwitchBoard.

It should also be noted that the gadget does not feature the iPad moniker on its outer casing. Rather it has prototype identification numbers in several locations on the rear shell and front bezel. A series of ‘X’ placeholders can be found on the rear where the device’s battery rating should be, and there is also a placeholder for a Wi-Fi chip included.

The starting bid was set to $4,800, but the prototype sold on the online auction and shopping website for $10,200 after having been bid on 23 times. Now while that’s a hefty fee indeed, there’s the possibility it might hold a few of Apple’s coveted secrets.