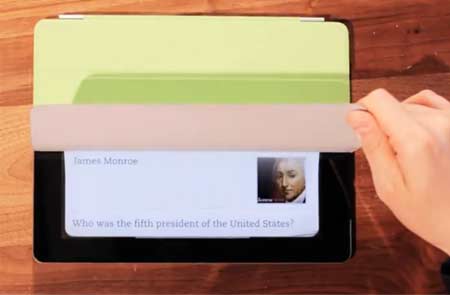 Who says studying cannot be fun, the updated version of the Evernote Peek app makes remembering those complicated notes interesting. The app featuring audio clues and linked notebooks is said to be the first to be especially designed for the iPad 2 encased in the Apple smart cover.

Users can either come up with their own notebooks or use an existing one to study from. When creating a notebook, its title flashes as the clue while the description becomes the answer to it. After choosing a notebook, users need to raise the smart cover slightly to peek at the clue. Lifting the cover even more will reveal the answer to it and simply close the cover to proceed to the next one.

As it’s a successor to the formerly launched Peek app, it comes with certain additional attributes. The Evernote Peek for iPad 2 now allows users to listen to clues on lifting up the smart cover. Also, three notebooks for bird calls, French and Spanish phrases come with the app to clearly explain the audio feature. On tapping the arrow button, the audio is replayed and stops when the iPad is covered. Further, one can create notebooks by recording notes or attaching an audio file to it.

Through this app, users will now have access to notebooks created by others via the Linked Notebooks option. Notes shared by members using the Add tab will appear for everyone. With cleaner interface, it lets users choose orders for clues in notebooks like random, date or time.

The Evernote Peek for iPad 2 app is now available for download at the Apple App Store.