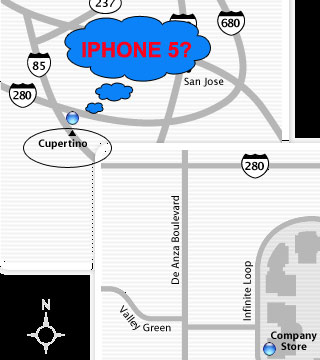 To say that the Apple iPhone 5 (if at all it is the slated device to launch on October 4) which by the way will now apparently be announced at Cupertino, Apple’s headquarters has managed to put everyone and not just the odd tech enthusiast in a tizzy would be an understatement of sort. What’s happening with the hotly-anticipated device anyway? While someday there’s hearsay of only an Apple iPhone 4S variant launching, at other times there is word of a completely new device. And yes, we are might confused!

Moving on to the most recent rumors which indicate that Apple has ditched its traditionally chosen San Francisco launch and the upcoming iPhone model (yes, whichever one it is!) will be announced at the company headquarters. All earlier iPhones and iPads have been revealed at San Francisco and this rumor does sound surprising to say the least. Whether it was Yerba Buena Center for the Arts, or the city’s Moscone Center, Apple did seem to have a liking for the city, obviously until now.

Mashable reports that All Things D speculates Tim Cook may not really be anticipating a grand launch, given the recent turn of events. And a more familiar venue which suffices the needs of a small intimate gathering would be more than enough. The seeming change of venue could also be so that Apple is able to show off the Wi-Fi and internet capabilities of the newest iPhone to the hilt. Understandably, internet connectivity may just be more reliable at the Apple campus than any other location.

Will there be a change in the way the Apple iPhone 5 is announced? Or simply the way in which the event proceeds? Well, it’s difficult to comment about anything right now and given Apple’s very secretive nature, we guess October 4 is the only day enthusiasts can wait for.