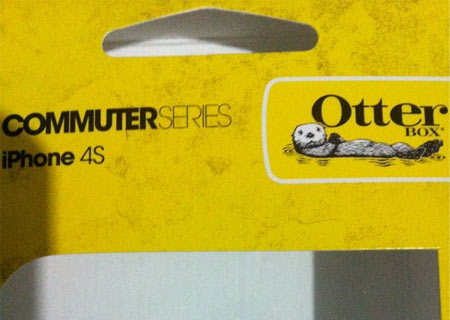 The Apple iPhone 5 release may not be happening after all, with rumor mills churning out on the possibility of just the iPhone 4S variant making it in time. And AT&T it appears has already lined up Otterbox Commuter series cases. With all the confusion surrounding this device, we’re hoping to see some sort of a big annoouncement happen next month.

MacRumors reports about @Chronicwire putting up new images of cases that have the label ‘iPhone 4S’ inscribed on them. They show the Otterbox branding, with claims of there apparently being 3,000,000 cases manufactured for the hotly anticipated device. The photos being revealed as a leak aren’t really of the original case but just the packaging.

And what exactly does the bundle suggest? Well, on its backside, the device shows off volume buttons to the right, a move away from the iPhone 4 which has them on the left edge. It’s positioned on top of the SIM-card slot. But if image leaks of the iPhone 4S itself indicate no such alteration in the upcoming handset’s form factor.

Besides, MacRumors also says BGR has the dope on AT&T stores revamping iPhone 4 cases in specifically the rear area so as to accommodate an improved camera. An update though hints at the cases being nothing more than refreshment to the existing Apple iPhone 4 cover lineup. Then there are also rumors about a batch of apparent bumper cases not being a good fit for the iPhone 4.

Apple does know how to jolt both loyalists and haters alike every time there’s a new device in the pipeline. Whatever Apple calls the next iPhone, we’re giving it the ‘Rumor Instigator of the Year’ award which it won hands down.