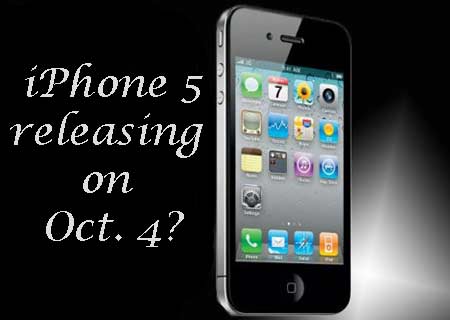 In the past month or so, we have seen a consistent inflow of rumors concerning the Apple iPhone 5 with the latest being reports about the supposed unveiling of the ssmartphone. The grapevine is abuzz with speculations that the technology giant is planning to host an event on October 4 where the main presenter is expected to be Tim Cook, who not long ago, took reins of the company in his hands.

This latest update comes our way via AllThings Digital which says Apple will showcase this much-awaited smartphone on October 4. Also, this will be the first major event by the company after electing Tim Cook as the CEO. And what remains to be seen is if the new CEO manages to take the legacy forward which his predecessor Steve Jobs left behind.

Though there hasn’t been an official announcement regarding the launch it sounds believable, as October has long been anticipated as the month which will mark the debut of the Apple iPhone 5. And why only the handset, people have also been waiting for Tim Cook also to make his debut with something as significant as the iPhone 5.

To refresh our memories, we came across leaked documents, earlier this month confirming dates of the commencement of this handset’s pre-orders. And rumors were not limited to just release date, features of this next generation handset too have been the topic of discussion for quite some time now.

Although AllThings D says the date is subject to change, Apple loyalists are expecting the Apple iPhone 5 to toddle in on October 4.