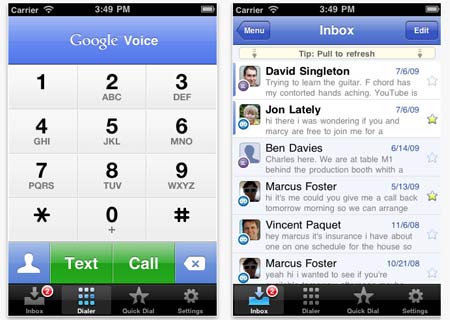 Last week was reported to have witnessed Google Voice do a disappearing act from the iTunes app store but it’s back now and available for users to download. The old version 1.3.0.1771 of the Google application was said to have come up against crash issues. So, the new version 1.3.1.1891 is out on the iTunes app store and Mountain View claims to have fixed the problem.

So users may want to gladly bid its previous version a hearty goodbye and say hello to the reworked version which has bounced back at us again. It is compatible with iPhone, iPod touch and iPad devices running iOS 3.0 or higher spinoffs, which means that it extends support to the latest offering in the Apple smartphone line up, the iPhone 4S that runs iOS 5.

Users can access Google’s app right from their Apple gadgets to send free text messages to the other phones in the U.S. Calls can be made using the Voice number and the added benefit that users enjoy is the ability to make international calls at low rates. They can even view the call history, make conference calls, block unwanted calls and more.

Naturally, users require a Google Voice account if they want to get their hands on this app. Fans can sign up for free through google.com/voice. Currently, the service is available for people residing in the U.S. only. Google Voice is now available on the iTunes App Store for download as a free app. Because the best things in life like shorter phone bills come for free.