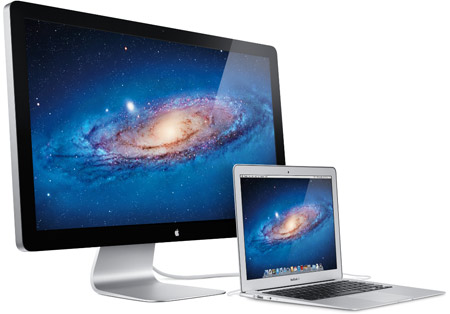 Just so no one forgets the Cinema Display has been upgraded with Thunderbolt I/O technology, Apple is now calling it the Thunderbolt Display. Typical of the traditional construct, the device flaunts an aluminum and glass enclosure and parades as the ultimate docking station for Mac notebooks.

The screen spreads out as a 16:9 edge-to-edge glass design and employs IPS technology to allow for a 178° viewing angle. Hooking up a Mac to the 27” monitor lets users access the notebook’s FaceTime camera, Gigabit Ethernet, USB 2.0, FireWire 800 and Thunderbolt ports. It also happens to embed its very own FaceTime HD camera, 2.1 speaker system and MagSafe charger.

“The Apple Thunderbolt Display is the ultimate docking station for your Mac notebook,” cited Philip Schiller, Apple’s senior vice president of Worldwide Product Marketing. “With just one cable, users can dock with their new display and connect to high performance peripherals, network connections and audio devices.”

An ambient light sensor delivers on the eco-conscious angle by automatically tweaking brightness according to external lighting conditions. The 2,560 x 1,440p Apple Thunderbolt Display even integrates three USB 2.0 ports, a FireWire 800 port, a Gigabit Ethernet port and a Thunderbolt port for daisy chaining a maximum of five other Thunderbolt devices. The interface can work with existing adapters for HDMI, DVI and VGA displays too.

The Apple Thunderbolt Display is scheduled to hit the Apple Store as well as their retail outlets and resellers within the next two months. It’s been marked with a $999 price tag for customers across the U.S. The system requirements naturally call for a Mac with a Thunderbolt I/O port, meaning anyone who buys the display must own the new generation Mac.