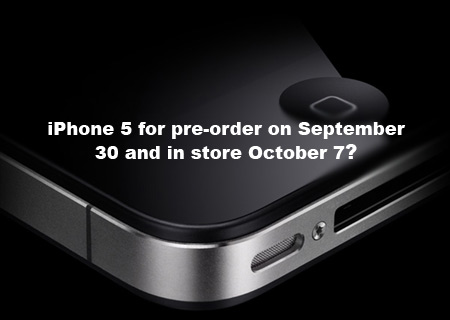 Word out indicates that the Apple iPhone 5 will hit the pre-order status by the end of next month mostly on September 29 or more likely a day later, even as the hype surrounding the design, features and availability of the highly-anticipated device continues to escalate. 9to5mac has managed to dig out reliable information speculating the smartphone to shelf-up on October 7.

With two launch dates slated out, their sources also stated the product to be in the last stages of pre-mass production and if all goes well, Apple is surely to hit the October 7 mark instead the October 14 target. So what would the iPhone5 be like? As we previously mentioned, the handset is rumored to sport a new design alongside an 8MP camera and the Apple A5 dual core processor, whilst most others state it to only possess hardware modifications and a similar form factor.

Additionally, the smartphone will come bundled with software like the voice-based navigation system and panorama photography capabilities. Also, with every release comes a new operating system, like the iOS 5 from Apple. Assuming the pre-order date of September 30 to be accurate, the much awaited iPhone 5 will is expected to receive an October 7 release date. Moreover, users can reportedly expect two models of the upcoming iPhone namely the 4G iPhone 5 or the iPhone 4S.

Since the introduction of the 4G mobile network technology has been well established, many anticipate the iPhone 5 to be 4G ready. Apple on the other hand still seems to carry on with its silent treatment by not disclosing any information till date.