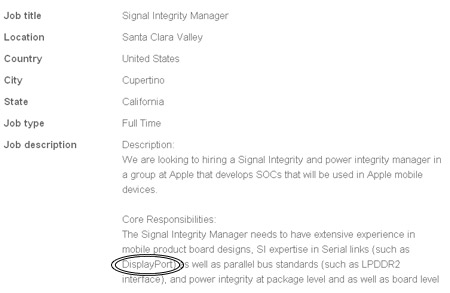 With hardly any description on the upcoming iPhone 5 in-hand, AppleInsider has managed to scoop out a job listing post made on the company’s website stating the requirement of a Signal Integrity Manager. The said post requires applicants to have SI expertise in Serial links (such as DisplayPort) for a group that develops SOCs which will be used in Apple mobile devices. It sure sounds interesting.

The role of this new manager in a group would refer to assisting and over-viewing the development process of SOCs. The SOC stands for ‘system on a chip’ which is the main processor and chipset used in devices, just like the Apple A4 and A5 available in the new generation iPhone, iPod touch and iPad today. What’s more, being on the lookout for an expert on the DisplayPort video standard suggests that Apple may just incorporate its future releases with the same.

Currently, only a few iOS devices are capable of connecting to external screens over HDMI. With the addition of the DisplayPort video standard, Apple devices should be able to connect to modern displays including Apple’s own Thunderbolt Cinema Screen. Since the iPhone 5 if rumors are to be believed is already well underway and there’s also the possibility of an iPad 3 release next year, the hunt for the right candidate may take a while along with the development of this technology.