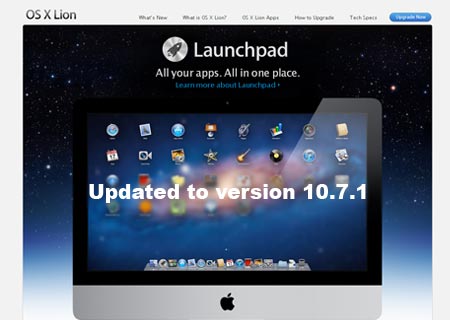 With its debut made nearly a month ago, the Mac OS X Lion from Apple gets updated to version 10.7.1. The new release is stated to include general operating system fixes that enhance the stability and compatibility of all Mac computers and is recommended for all Mac PCs running on OS X Lion.

Addressing bugs which were previously reported by users on the discussions page, the OS X Lion 10.7.1 update includes improvements and fixes to a number of features. The unresponsiveness found in the system which occurred during playback of videos on the Safari web browser is now fixed along with issues towards interruption of audio or no sound at all when connected thought HDMI or the optical audio jack and better and improved reliability over Wi-Fi connections.

Furthermore, the disappearance of the admin user account when updating to the OS X Lion has been addressed alongside the issue related towards the prevention in transferring of data, settings and compatible applications onto a new Mac PC running the OS X Lion. For installing the upgrade, users will have to navigate to the Software Update option from the Apple menu and are recommended to backup their system data with the Time Machine feature before continuing.

The Mac OS X Lion 10.7.1 update is available to OS X Lion-based Mac PCs and only comprises fixes to issues occurred and improvements to the compatibility and stability of the system. Additionally, users can also upgrade their Mac PCs with the manual release available on the Apple support download page.