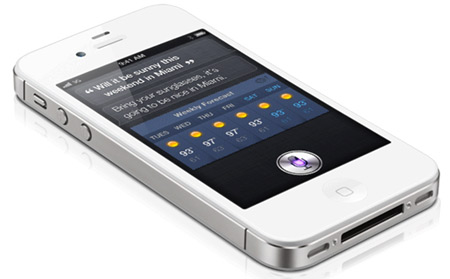 Breaking the previous record of 600,000 single day pre-booking set by its predecessor the iPhone 4, the iPhone 4S pre-order rates have topped it off by exceeding the one million mark within the first 24 hours. Scheduled to release on October 14, the handset will come bundled with iOS 5, enabling over 200 new features and even more advanced hardware components as compared to previous releases.

Powered by the Apple A5 dual core SOC that is built to provide higher performance and better graphics, the device packs in an 8MP camera for snapping images and recording videos in 1080p full HD. Besides this, the iPhone 4S is equipped with Siri, a sort of voice command enabled software that carries out tasks such as commencing voice calls, sending messages and scheduling meetings without needing explicitly worded instructions.

Philip Schiller, Apple’s senior vice president of Worldwide Product Marketing commented, “We are blown away with the incredible customer response to iPhone 4S. The first day orders for iPhone 4S have been the most for any new product that Apple has ever launched and we are thrilled that customers love iPhone 4S as much as we do.”

Complementing the handset’s new hardware specifications is the latest iOS 5 operating system that arrives with over 200 new features. Additionally, users will receive free access to the iCloud service which automatically stores content onto its servers. With the official release date being marked for October 14, the iPhone 4S pre-order rate is making the headlines for already crossing over a million units booked.

Currently, fans can opt for an iPhone 4S pre-order through AT&T, Sprint, and Verizon as well as Best Buy. The smartphone is slated to be available in the U.S, Australia, Canada, France, Germany, Japan and the UK starting this Friday. Furthermore, it is expected to roll out in 22 other countries by the end of October.