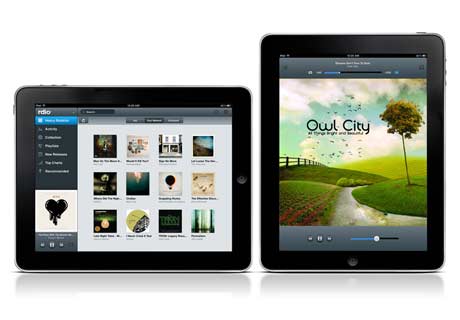 After making iPhone users groove to its perky tunes, the Rdio app has geared up to debut on the Apple App Store for the iPad, reports the Rdio blog. The Rdio for iPad app is very much similar to its counterpart for iPhone which allows sharing music with friends and following members with a great taste in music.

With a high resolution album art, the app allows playful controls of various functions. Users can get access to track lists with a simple tap on the album art. Also, the app runs on both landscape and portrait screen orientations. Along with collaboration on playlists, one can go through recommendations of other members.

The app also allows searching friends’ profiles and following them while keeping a tab on the network’s activity. Besides access to music when offline, users can listen to Artist Radio and explore various options through top charts, new releases and more.

The social music service has more than 10 million songs to offer without interruption from advertisements. With numerous albums added to the list every week, it lets users create as many playlists as they want. The updated version of the app is designed to meet the terms of new iTunes.

The Rdio for iPad app can be downloaded for free from iTunes and needs a subscription from Rdio Unlimited or Apple’s in-app purchasing system after a 7-day trial period.