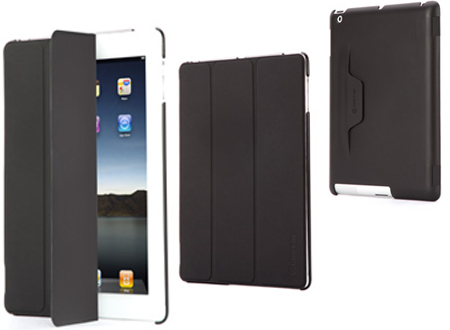 We’re not saying the Smart Cover should be feeling a bit inadequate as compared to the new Griffin IntelliCase for iPad 2. There are always those in the crowd who’d rather leave the slate’s rear stamped with the Apple logo to take care of itself and keep the display on the front carefully guarded from scratches.

Built for the sort of users who can stand seeing a scratch on either side of the device, the IntelliCase protects the back panel of the second generation Apple tablet with its polycarbonate shield. Flexible thermoplastic polyurethane veils the multi-touch display on the face. And just like the Smart Cover, it puts the iPad to sleep when spread across the screen and awakens the system when pulled away from it.

“Consumers were eager for a case that protected the back of the iPad 2 but also took advantage of the interactive feature that the magnetic sensors enable,” expressed Mark Rowan, President of Griffin Technology. “The IntelliCase for iPad 2 offers users just that, protection for the back while incorporating a cover that automatically wakes your iPad when it’s opened.”

The micro-textured surface is aimed at allowing a better grip on the slate. The foldable front cover may collapsed to place the ‘iDevice’ in two positions. So users can get it to stand upright for watching videos or reading and even choose to lay it down at an incline for typing convenience.

Out just in the color black, the Griffin IntelliCase for iPad 2 has been stuck with a $59.99 price label.