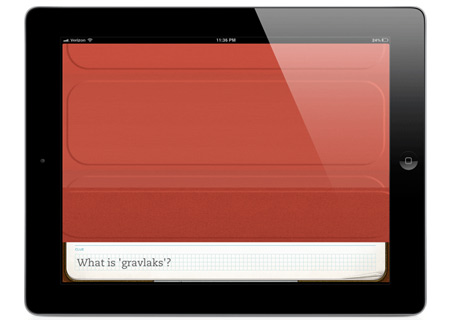 With the new update to Evernote Peek, iPad users need not worry about the Smart Cover requirement any more as the app now comes with a virtual cover of its own. That means learning is even more fun for users on the iPad and not only the iPad 2.

The virtual cover is built as an exact replica of the Smart Cover and maintains its dynamics as well. To select a Virtual Cover, simply enabling it from settings and swiping down the tab to choose between the 10 different available colors options is called for. According to the official Evernote blog, users can put in the study material, hide it and also view clues by sliding upwards on the screen. The application operates on any iPad just as it would with the Smart Cover attached. Featuring five new notebooks from VisitEurope as the latest additions, users can learn about Western, Central and Eastern Europe along with Scandinavia and the Mediterranean.

On making a notebook for new study materials, the title will be utilized as the clue, whilst the body is placed as the answer. Designed around the need and importance of learning, the app creates a studying experience that’s a bit different from conventional learning methods and therefore, fairly new. Since not all users own an iPad 2 or the Smart Cover, the virtual one provided by the company is most likely to fill the missing gap and could also position itself as a suitable alternative.

The updated Evernote Peep app for the iPad and iPad 2 can be downloaded from iTunes for free.