TechShout
Home Apple Apple enriches its iMac line-up with Intel Core i3, Core i5 and... 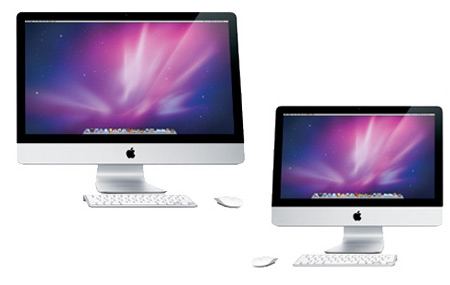 Apple was lately in the news for bringing its Apple iPad to nine more countries. Now the company reveals that it’s updating the all-in-one iMac line with the latest Intel Core i3, Core i5 and Core i7 processors as well as powerful new graphics. With these inclusions, the models boast of quad-core speeds up to 2.93 GHz and dual-core processor speeds up to 3.6 GHz. Discrete graphics are also offered with the ATI Radeon HD 5750.

Dual-core Intel Core i3 and Core i5 as well as the quad-core Core i5 and Core i7 processors come complete with built-in memory controller which lets users exploit its 1333 MHz memory. The ATI Radeon HD processors provide them with better graphics for technical applications, 3D games and creative software. The iMac products come complete with displays that boast of IPS technology and card slots that support SDXC format. A quicker startup and application launch time is also achieved as the iMac SSD supports up to 215 MB/s data transfer rates.

“We took the world’s best all-in-one and made it even better,” commented Philip Schiller, Apple’s senior vice president of Worldwide Product Marketing. “With the latest processors, high-performance graphics and signature aluminum and glass design, customers are going to love the latest iMac.”

All the latest iMac desktop computers include four USB 2.0 ports, Mini DisplayPort for audio and video output, one FireWire 800 port and slot-load 8x SuperDrive with double-layer support. Users can also expect the iMacs to feature AirPort Extreme 802.11n wireless networking and Bluetooth 2.1. The 27-inch iMac offers a supplementary option of a 256GB solid state drive for its primary or secondary storage drive.

Apple further states that each iMac comes bundled with the Magic Mouse with them also having the option of ordering the new wireless Magic Trackpad. The PCs also comply with Energy Star 5.0 requirements and is bestowed with the EPEAT Gold status. They also come bundled with Mac OS X Snow Leopard as well as iLife which is an innovative suite of applications that include iPhoto, iMovie and GarageBand.