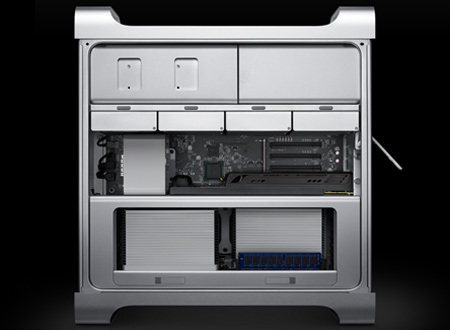 Apple may have been hitting the headlines over the past few weeks for some nice or not-so-nice reasons. Apart from the 27-inch LED Cinema Display we reported earlier in the day, Apple has also unveiled their new Mac Pro desktops. These fresh entrants incorporate quad-core and 6-core Intel Xeon processors and brand-new ATI graphics.

The quad-core Mac Pro houses a 2.8GHz Quad-Core Intel Xeon W3530 processor and 3GB of 1066MHz DDR3 ECC SDRAM memory that can be expanded by up to 16GB. The visuals are powered by the ATI Radeon HD 5770 GPU with 1GB GDDR5 memory. Also included are a 1TB 3GB/s SATA HDD, four PCIe 2.0 slots and an 18x DVD±R DL/DVD±RW/CD-RW SuperDrive with double-layer support.

The desktop’s chassis accommodates five USB 2.0 ports as well as four FireWire 800 ports. Its connectivity options also span over AirPort Extreme 802.11n and Bluetooth 2.1+EDR. The device is accompanied by an Apple keyboard with numerical keypad and the company’s very own Magic mouse. It is fitted with two mini DisplayPorts and one DVI dual-link port.

“The new Mac Pro is the most powerful and configurable Mac we’ve ever made,” affirmed Philip Schiller, Apple’s senior vice president of Worldwide Product Marketing. “With up to 12 cores, the new Mac Pro outperforms our previous top-of-the-line system by up to 50 percent, and with over a billion possible configurations, our customers can create exactly the system they want.”

The 8-core Mac Pro is embedded with two 2.4GHz Quad-Core Intel Xeon E5620 processors and 6GB of 1066MHz DDR3 ECC SDRAM memory that can be extended to 32GB. Its other mentioned specifications read the same as the quad-core variant. The last mentioned is tagged at $2,499, while the 8-core Mac Pro costs $3,499. Each Mac is sold with Mac OSX Snow Leopard and the iLife media management software.

Both are offered with a bunch of configuration options such as 3.2GHz Quad-Core Intel Xeon W3565 or 3.33GHz 6-core Intel Xeon W3680 processor choices for the first model. The quad-core Mac Pro is also extended with two ATI Radeon HD 5770 cards, up to 16GB of DDR3 ECC SDRAM memory and four 512GB SSDs.

Up to two 18x SuperDrives with double-layer support, a Mac Pro RAID card and a dual-channel or quad-channel 4GB Fibre Channel card can be selected for both models. The options proffered with 8-core version include two 2.66GHz 6-core Intel Xeon X5650 or two 2.93GHz 6-core Intel Xeon X5670 processors, one ATI Radeon HD 5870 card, up to four 1TB or 2TB SATA HDDs and up to 32GB of DDR3 ECC SDRAM memory.