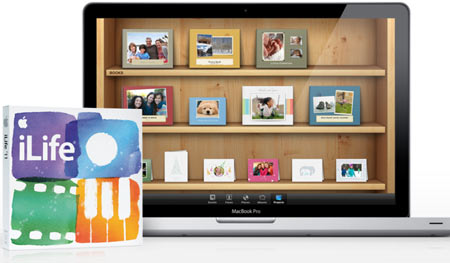 The ‘Back to the Mac’ event had several treats in store for Apple fans. The new MacBook Air, the Mac OS X Lion and FaceTime for Mac were joined by Apple’s release of iLife ’11. iPhoto, iMovie and GarageBand have all been included in the said software utility.

iPhoto ’11, with its new filmstrip, lets users browse through pictures, edit and share them in full screen mode. Facebook integration means that photos can be published directly to the Wall or an existing album. Comments left by friends and previously published images that were uploaded using other applications all appear with iPhoto.

When mailing photos through Yahoo! Mail, MobileMe, Gmail, AOL or Windows Live Hotmail, users can pick from eight different template themes, rearrange images with the help of the drag-and-drop feature, tweak the image mask and resend such messages after editing them within the application itself.

Slideshows with themes such as Holiday Mobile, Places as also Reflections, books and letterpress cards are some of the other features integrated into iPhoto. Turning home videos into movies should probably get interesting with iMovie ’11 that offers fifteen movie trailer templates, color coded audio waveforms and other audio editing tools.

iMovie also features over twelve one-step effects, People Finder as well as News and Sports themes complete with a Sports Team Editor. Another facility is the ability to publish content to CNN iReport, export videos to iTunes and even send a video podcast created in iMovie to the Apple Podcast Producer.

GarageBand ’11 is quite literally a school of rock. It has 22 new piano and guitar lessons categorized according to the genre. Video demonstrations, synchronized notation, instrument animations, a Chords Trainer, Pop Piano, a progress bar and a performance meter among others arrive with this utility.

Five new stompbox effects and seven new guitar amps accompany the older ones. GarageBand may also be played hands-free with the separately sold Apogee GiO. Creative inspiration is best gleaned on GarageBand through the Flex Time feature that throws up edits with the original performance and Groove Matching brings the user’s tracks together optimally.

Those who’ve got themselves a Mac recently can upgrade to iLife ’11 for $6.99. It’s $49.99 for the iLife ’11 package that’s being sold through Apple retail stores and other authorized resellers.