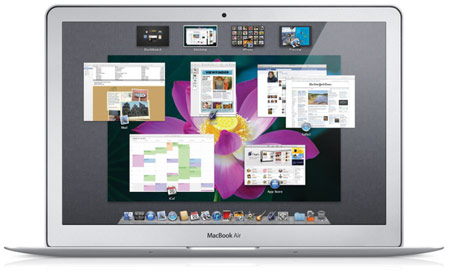 It doesn’t seem to matter that the new MacBook Air was announced after the Mac OS X Lion. The latter still seems to be getting more attention from everyone concerned. Apple’s slipped the covers off Mac OS X Lion and attached a tagline that says, ‘The power of Mac OS X. The magic of iPad’ to it.

Building this new version apparently involved the complicated process of introducing the best thinking from Mac OS X to the iPhone, taking the iPhone expertise to the iPad and finally offering it all back to the Mac with this eight big release of the OS that’s coming in the summer of 2011.

Using the trackpad to swipe between apps in full screen and the desktop hosting multi-window apps now enjoy systemwide support. Just like on the iPad, this new Mac OS version will extend the Launchpad icon that makes navigating through apps a smooth process.

The Mac command central’s going to be the Mission Control feature integrating Expose, Dashboard, Spaces and full screen apps in one space. Also arriving with this OS on Mac is the Mac App Store with apps that are touted to require just a click to get up and running.

Being able to grab everything from where you sit is obviously the concept behind features like Mission Control and it seems to be working extremely well for Apple.