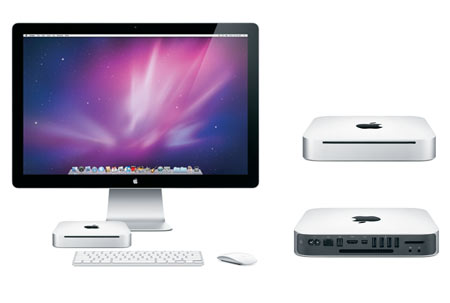 Even after all the attention showered by tech-enthusiasts post its iPhone 4 announcement, Apple it appears isn’t satiated just yet. In a move that may surprise and interest many, the company today revealed a new Mac mini for 2010. Sporting a completely redesigned ‘avatar’, this latest Mac boasts of double the graphics performance, a new HDMI port and a new SD card slot as against the earlier model.

In what is claimed to be an amazingly compact aluminum enclosure, Apple has built the device using its unibody construction process. The mini’s sleek vault is just 7.7 inches square and 1.4 inches thin. Users should be able to do away with their external power adapter as the device comes complete with an integrated power supply. Besides minimizing cable clutter, the desktop also includes a removable panel beneath that delivers quick access for memory expansion.

The flexible gizmo supports a number of existing peripherals like mice, keyboards and digital displays. Users on the look for superior home entertainment should be pleased with the new HDMI output that allows the Mac mini to be connected to an HDTV. As for the novel SD card slot, it should make photo and video transfers from a digital camera hassle-free. This latest Apple innovation is offered in two models namely one that’s standard with a 2.4GHz Intel Core 2 Duo processor and the other with 2.66 GHz Intel Core 2 Duo processor.

Attributes common to both the versions include Nvidia GeForce 320M integrated graphics, AirPort Extreme 802.11n wireless networking and Bluetooth 2.1+EDR and Gigabit Ethernet. Both the models also reveal four USB 2.0 ports, a FireWire 800 port and a single Mini DisplayPort. Bundled with an HDMI to DVI video adapter, they also comprise of a combined optical digital audio input/audio line in and combined optical digital audio output/headphone out.