Along with new iPads, the Cupertino giant was expected to deliver better hardware for the MacBook Pro with Retina display and Apple TV. Well, while the latter was a no show at the event, the company did refresh its high-end laptop series with beefier components.

As expected, Apple has designed the new MacBook Pro Retina with fourth generation Intel Haswell processors. The company is still offering it in 13-inch and 15-inch models, both packing high resolution displays powered by Iris graphics which are estimated to deliver a performance boost of around 90% compared to the previous generation laptop. The larger model can be coupled with a GeForce GT 750M GPU with 2GB of video memory for enhanced performance. 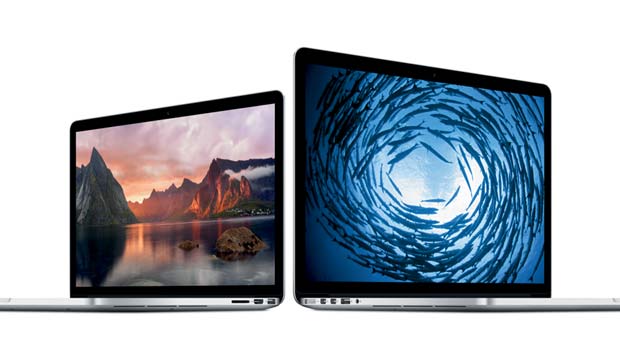 Even with beefier components, the battery life has been improved. The 13-inch model is estimated to deliver 9 hours of activity which is around 2 hours more than its predecessor, while the 15-inch version can provide an extra hour of usage bringing the total to 8 hours. Other features comprise of PCIe-based storage that’s said to deliver around 60% faster read speeds, 802.11ac Wi-Fi and dual Thunderbolt 2 ports. Additionally, the new MacBook Pros ship with OS X Mavericks.

The new MacBook Pro Retina has already gone on sale in the US through Apple’s online and retail stores. The 13-inch model comes in 3 configurations, each carrying a dual core i5 chip and Intel Iris graphics. The first one, priced at $1,299, has a 2.4GHz processor with 4GB of RAM and 128GB of flash storage. The second one which is selling for $1,499 has 8GB of system memory, the same 2.4GHz CPU frequency and a 256GB SSD. Lastly, the third option packs a 2.6GHz processor, 8GB of RAM and 512GB of flash storage.