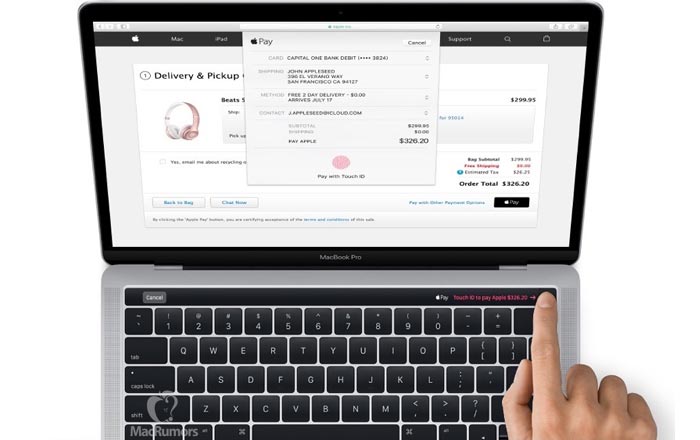 The latest macOS Sierra update which came out recently holds a big surprise hidden within its depths, revealing a pair of images depicting a laptop which are very likely the highly-awaited revamped MacBook Pro. The fact that the photos were sourced from Apple itself definitely adds a layer of authenticity to the pictures.

The accidental leak appears to confirm the presence of an OLED touch bar above the keyboard instead of the standard physical function keys. The innovative piece of hardware is apparently called the Magic Toolbar, in line with past Apple naming schemes like Magic Mouse, Magic Keyboard, and Magic Trackpad.

Based on the images, the Magic Toolbar will present choices based on a user’s activities. An Apple Pay transaction can be seen on the main screen. Accordingly, the smaller screen displays options like cancel and asks the person to pay for their purchase using Touch ID.

Touch ID appears to be integrated into a practically-invisible power button located at the end of the strip. Other than these cool new features, the redone MacBook Pro still looks similar to its predecessors in these photos. Noteworthy changes include speakers located along either side of the keyboard and smaller bezels.

MacRumors thinks the laptop in the pictures is the 13-inch MacBook Pro and notes that the redesigned hinge could be a hint that the new device will be much thinner than before. Furthermore, the appearance of flatter keys could indicate that Apple is looking to adopt the Retina MacBook’s butterfly mechanism.

Apple is expected to announce the new MacBook Pro and MacBook Air at a huge event on October 27.