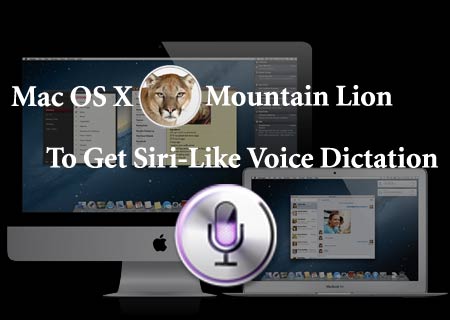 With Siri being committed to the iPhone 4S for now, and the new iPad having its own speech-enabled feature dubbed Dictation, the upcoming Mac OS X Mountain Lion is likely to receive one of its own. The Dictation attribute was spotted within the beta build of the upcoming desktop OS from Apple.

A resource file from the latest version of the Safari web browser which comes included in the developer preview indicates that the platform is most likely to receive this new voice-enabled addition. The Dictation feature was previously launched with the third-generation iPad. Through its speech recognition capabilities, users could conveniently feed text into their device without the need for typing.

On the latest iPad and iPhone devices, users can write emails, send texts, search the web and even create notes through voice input, by simply tapping a microphone button on the virtual keyboard to activate the service. However, 9to5Mac points out that the Mac OS X Mountain Lion doesn’t have a virtual keyboard, nor does its physical one have a microphone key. So it really isn’t clear how Apple plans on making this service conveniently accessible.

In the words of Apple ‘The ninth major release of OS X, Mountain Lion introduces great features inspired by iPad, re-imagined for the Mac.’ This raises the possibility of the voice dictation feature arriving on Mac systems. However, the report states that the attribute isn’t functional in the current beta version and it could be specific to certain Mac-powered devices, perhaps the upcoming MacBook Pro refresh.