Low-cost ‘Eee PC’ mini Laptop introduced by ASUS and Intel; could be the new ‘OLPC’ 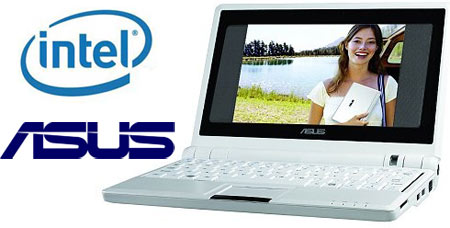 Intel has joined hands with ASUSTek to introduce an array of low-cost portable, which includes a laptop that would be priced at $200, especially for use in developing countries.

The announcement of this revolutionary notebook dubbed ‘Eee PC’ was made at Computex 2007. This tiny full featured low-end laptop could well become part of the ‘OLPC’ Project.

To showcase the Eee PC, Jonney Shih, chairman and chief executive, ASUS, was invited to announce the low-cost laptop, which has been designed to help spread computing to poorer regions of the world.

In case you are wondering, the three Es in the Eee PC stand for Easy to Learn, work, play; Excellent Internet experience and Excellent mobile computing experience.

The new Eee PC laptop, which costs just $200 aims to provide access to knowledge and modern forms of education to people in developing countries. Thus, Intel has named it as a “World Ahead” initiative.

According to Sean Maloney, executive vice president at Intel and chief marketing and sales officer, “It will give people the chance to access the Internet and share in the 21st century opportunity.”

Listed below are the features of the $200 Eee PC laptop:

The Eee PC Laptop will be available sometime later this year and the cost is expected to range from $199 to $299 depending on the feature set. Intel said it hoped to ship about 200,000 of the notebooks this year after production begins later this summer.