Many OEMs have already started to offer 64-bit smartphones and it looks like Motorola will be jumping aboard the bandwagon soon. A device which could be an updated version of the Moto G handset has been spotted online with one of the latest Snapdragon 64-bit processors onboard.

Gizmobic has spotted the mysterious Motorola smartphone on Geekbench packing a 1.2GHz quad core SMS8916 processor. This SKU is part of the Snapdragon 410 series which is based on the 64-bit Cortex A53. The website suggests that the device could be a new Moto E, but we highly doubt that the company will give its entry-level phone such a huge speed bump. 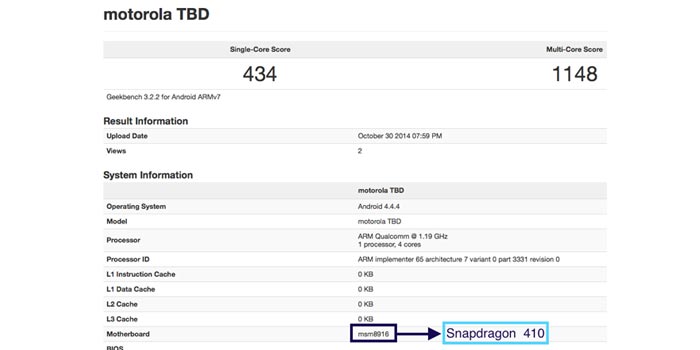 But then again, why would the company release an updated Moto G when the second generation phone just went official a couple of months back? Well, it looks like the OEM is using the same approach it implemented for the previous generation. Back in May, the company released a 4G version of the smartphone for LTE markets.

And since the latest Moto G doesn’t have LTE radios onboard, the leaked device could just be for this very purpose. The benchmark website has also disclosed that the device will have 1GB of RAM and run on Android 4.4.4 KitKat. We could see it go official with version 5.0 Lollipop, but that depends on when Motorola plans to launch the phone.

The handset should retain the same design and features found on the second generation Moto G. We’ll keep you updated with any new information that turns up on this mystery Motorola smartphone.