We’ve known that Samsung India has been working to launch the Nexus 10 in the country, but there was no concrete information on when we would see that happen. Well, it looks like that day is closing in as the 10-inch Android slate has now popped up on the official website, a year after it was unveiled in the US.

What’s interesting here is that Google plans on selling its 2013 Nexus lineup which includes the latest flagship smartphone and the 7-inch slate, in India soon and there’s word that a refreshed Nexus 10 is also in the works with Asus as the manufacturing partner and not Samsung. It isn’t clear as to why the giant is introducing the tablet in the country when a newer version is due to launch soon. 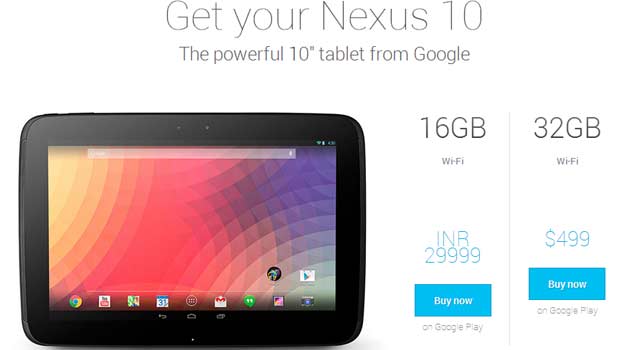 The Nexus 10 is currently listed on the official website with a Rs 29,999 price tag for 16GB of storage. And while there’s a ‘Buy Now’ option available, it won’t let you purchase the slate just yet. Instead, you’ll be taken to the Play store where a message highlights that ‘the device is not for sale at this time.’

Specifications of the Nexus 10