That Motorola and Google have made a huge phablet named the Nexus 6 is no big news at the moment, with the only question remaining is when they will unveil the handset. However, the now-retired notorious leakster Evan ‘EvLeaks’ Blass has let out a render that’s amping up the anticipation furthermore.

This one’s a Photoshopped version for sure, but it seems to be based on the official model of the Nexus 6 as it matches all the design details that have been revealed in the past. Prime among them is the fact that the phone’s design has been borrowed from the new Moto X by Motorola, so there’s no surprise that you’re seeing the front-facing speaker grills and a metal frame.

What a depressing few days. I remember 1 thing that used to make me feel better, tho. No mark in deference to Nexus. pic.twitter.com/76zhSfu8rJ

We can say that it’s for the first time that we’re seeing that particular wallpaper on a Google phone, but all those icons on the homescreen have been spotted prior to this. Rumor has it that the Nexus 6 is about to be unveiled later today, along with the Nexus 9 tablet from HTC. Let us now see if that’s true.

Also Read: HTC Nexus 9 to be outed on October 15 for $399, say unofficial reports

Meanwhile, the Motorola Nexus 6 has been spotted lurking around on the AT&T website (via GSM Arena) which is quite an anomaly since the carrier doesn’t sell Nexus phones directly. Anyway, it has been accompanied by a render of the LG Vista and bears an unbelievable on-contract price of $49.99. But the fact that the listing is at least named the Nexus 6 gives us proof that the device is destined for AT&T.

Here’s a good look at the leaked specs of the Nexus 6: 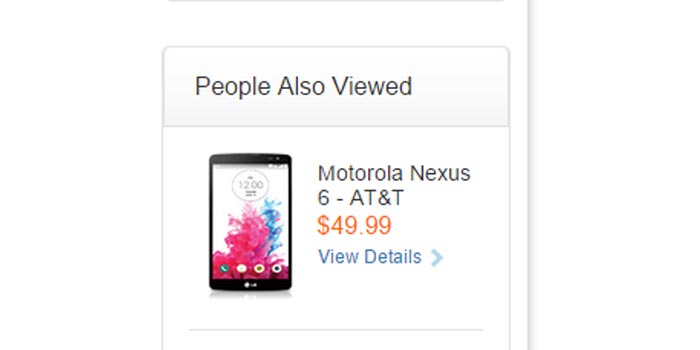 If Google is indeed planning to unveil the Nexus 6 and the Nexus 9 later today, it’s just a few hours of waiting that you’ll have to do now. In the meantime, enjoy this short Android L teaser that Google has just released.