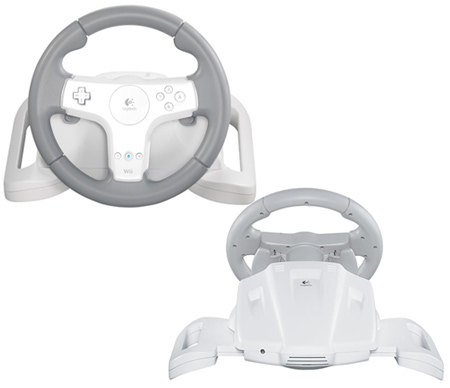 Logitech has announced its new Speed Force Wireless racing wheel for the Wii gaming console, which is licensed by Nintendo. The Logitech’s newest force feedback wheel is compatible with EA’s Need for Speed Undercover for the Wii.

Logitech Speed Force Wireless features a one-piece design. Logitech claims that its gaming wheel is convenient to use whether you’re sitting on your couch, arm chair or living room floor. The built-in gas and brake controls are located on the wheel itself. While the expandable lap rest can easily be adjusted. It delivers comfortable game play without the need to use a table or a desk.

The Logitech Speed Force Wireless racing wheel works on 2.4 GHz wireless technology, which promises lag-free racing from up to 30 feet away from the console. The USB receiver easily gets connected to the Wii, and then users can start racing. When the users want to discontinue gaming session, they can simply disconnect the wheel by removing USB receiver.

“We’re excited to team up with Nintendo and Electronic Arts to bring driving realism to the Wii and Need for Speed Undercover,” said Ruben Mookerjee, Logitech’s director of product marketing for gaming. “Logitech has been at the forefront of force feedback technology for more than a decade, and we’re confident that our driving platform will be an indispensable part of the racing experience on Wii as more titles that support it become available.”

The Logitech Speed Force Wireless racing wheel is scheduled to be available in the US and European market in November 2008. It is priced at $99.99.