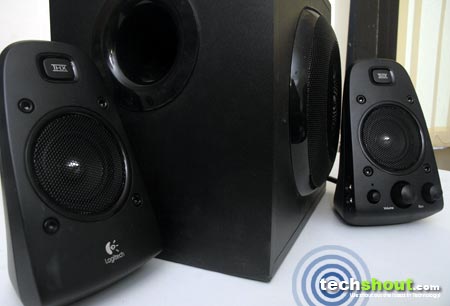 Portability and its umpteen advantages have sidelined the good ‘ol speaker systems for PCs to a great extent. However, this hasn’t stopped manufactures from churning out such systems. One such audio peripheral that has lashed out of Logitech’s quarters is the Z623. This 2.1 channel speaker system requires ample of space around your desktop. Let’s run through its attributes and know if it is capable of pleasing your aural senses. To know it all, read on this review of the Logitech Z623.

The carton carrying this computer peripheral popped out two stereo speakers and a subwoofer. Each stereo speaker measures 7.8(H) x 5.6(W) x 5.4(D) and features an angular design on the front side. The Logitech Z623 speakers seemed huge than the usual ones that you would see accompanying a computer. They were much wider at the base and tapering towards the top. The speakers were drenched in shades of black with a circular metallic grille at its center. Logitech probably wanted to add in a stylish touch with the four large screw shaped indents around the circular portion and the THX certification which is marked stylishly on the front upper side.

The right speaker is additionally embedded with the main power button with an LED indicator and two knobs – volume and bass. Its lower left side has two 3.5mm jacks for auxiliary input and headphone each. A hardwired cable juts out of its rear side. On the other hand, the left speaker has the Logitech logo etched on its front lower portion along with the THX certification mark and does not bear any controls. It has a thinner cable running out of its backside with an RCA-type connection. Evidently, there is no option for USB. However, we feel this would leave your USB ports vacant as the speakers aren’t portable anyway. In fact, the sub woofer is surely a heavy piece of box.

The subwoofer is a huge square box measuring 11.9” (H) x 11.1” (W) x 10.4” and it has space carved to affix all the ports – speaker ports, 3.5mm primary input for PC and stereo RCA. The output is capable of rattling nearby objects. One may miss a handy remote control that is usually seen with computer speakers these days (as you will notice that all controls are positioned on the right speakers). Furthermore, you may not have to reach the subwoofer to adjust the bass as the bass knob has also found its place on the right speakers. What may come as a glitch are the missing detachable cables of the speakers. This could prove to be inefficient if cables get wary as one cannot simply replace them in such a case.

This 2.1 channel speaker system took us for a surprise at delivering audio. It turned out to be much better than most of the 2.1 speakers. The sound quality is crisp while the subwoofer and satellites work in tandem. Each satellite outs 35 watts while the sub is capable of delivering 130 watts. It outs thumping music and users will be forced to tap their feet to the peppy tunes as we did. The speakers didn’t disappoint us at moderate or lows either. The bass is powerful enough to be heard even at quieter levels. 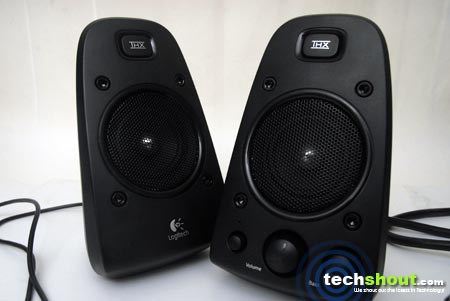 The Logitech Z623 turned our room into a mini theatre as we enjoyed some of our favorite flicks and videos. These speakers could make a great option for a party or a movie night. However, it is well suited for a large room and could be too loud for a small room unless you like it that way.

The THX certification also helps deliver good audio quality from the Z623. It has helped emit audio almost close to the way it was meant to be. Thus, THX certification is no more entitled to theatres or high-end stereo systems but also reaches homes through such computer speaker systems. We don’t say that you would get a similar experience like a THX theatre but watching movies using this system was a delight. It is loud enough to fill in a large room of friends and family and the sound quality of the dialogues is decent as well.

Moving to some technical specs, the Logitech Z623 offers frequency response from 35Hz – 20kHz. The satellites equip 2.5-inch dome drivers while the subwoofer houses 7-inch pressure driver. Those who have got accustomed to wireless peripherals could find these speakers cluttering their desks with cables. Moreover, the product isn’t sleek, so those with space constraint could check the dimensions before laying their hands on this product.
The gaming scenario with these speakers is fun-filled and gamers would be engaged into gameplay for hours. However, at several instances the booming goes overboard.

It is really nice to see Logitech speakers come with THX certification.

The company has packed in a solid subwoofer with this 2.1 channel speaker system.

Well, we felt that controls embedded on the right speaker was a good move, owing to the usability of these non-portable speakers.

Though the device comes across bulky, the built quality of the system seems quite sturdy.

The subwoofer of this speaker system is too huge and could also lead to space constraint.

Surround sound is negated in the Z623 due to the 2.1 channel system. Moreover, the loud audio gets boomy at times.

Logitech has crafted a decent 2.1 channel speaker for computers. It is simple to setup and use. However, it can’t be categorized under portable or carried along effortlessly. Though not out-of-the-box, the powerful subwoofer and satellites together help deliver decent and loud audio. The THX certification mark is another appreciable factor of this speaker system. If you are looking for an affordable speaker system in a considerable spacious desk then these Logitech speakers could match your taste. The Logitech Z623 Speaker System has managed to climb the rating figure up to 8 on a scale of 10. It carries a decent price tag of around Rs. 11,495.