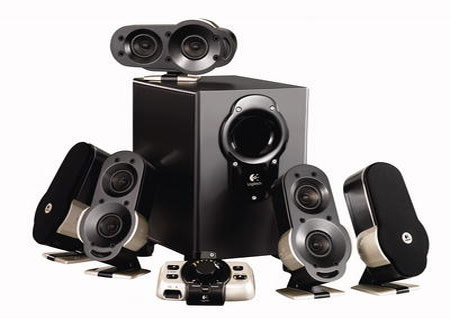 Logitech has unveiled the G51 Surround Sound Speaker System, which will be a treat for gamers. Part of the award-winning G-series family of PC gaming peripherals, this 5.1 speaker system features 360-dgree surround sound with dual Matrix modes.

The G51 speaker system incorporates a number of technologies which are crucial for an unprecedented audio experience, an important factor for gamers.

The Logitech G51 Surround Sound system makes 360-degree surround sound available with or without a multi-channel audio source. Further, the dual Matrix technology creates a 5.1 surround sound experience from any common two-channel stereo source. This technology splits the audio signal into six channels of sound without degrading the audio quality. Thus, even if a game doesn’t provide six-channel audio, surround sound will still be possible. First person shooter gamers will also be able to hear their enemies creeping up from behind and if they are shot at, they’ll know exactly which direction the bullets have come from.

The Logitech G51 Surround Sound Speakers are equipped with an improved control pod that includes both headphone and microphone jacks. This control pod also provides precision dual mute controls which allows gamers to easily mute the game’s audio or mute only the microphone, or both.

Moreover, the pod has silicon feet, which allows gamers to play in peace without worrying if it shifts during intense hours of gameplay.

Logitech has also provided the ability to mod the G51 speakers. This allows gamers to create their own artwork for the four left and right satellites. Further, gamers can also rotate the satellite stands to mount them on a wall, or clip the center channel to the top of an LCD flat-panel monitor.

Listed below are some other salient technologies used in the G510 Surround Sound Speaker System:

The Logitech G51 Surround Sound Gaming Speakers are available in India with a warranty of 2 years at a price of Rs.12,995.