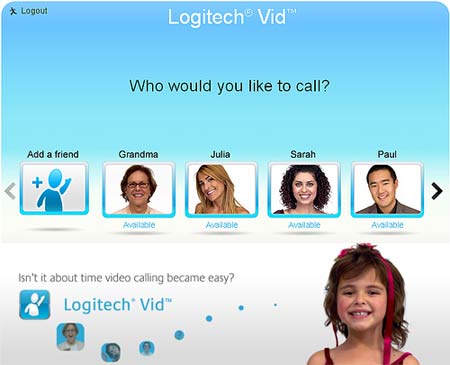 It’s hardly been three months after Logitech has introduced its free, fast and easy video-calling software namely Vid. Well looks like it’s already proven to be a hit among its users. The Logitech Vid has crossed the one million mark after the company registering its one millionth Vid user. The reason behind the popularity of the software is seen as its free services.

The efficient free video-calling service claims to set up in about half the steps of competing solutions. Also, this software boasts of support for both Windows and Mac operating systems along with offering compatibility to stand-alone and embedded webcams. It makes setting up and placing video calls much easier as compared to how it was earlier. Furthermore, the company’s Vid software allows users to send requests for video calls.

“One million registered customer accounts is a tremendous accomplishment, making it clear just how appealing video calling can be when it’s simplified,” shared Scott Lomond, vice president of Logitech’s video conferencing services. “With people downloading Vid from every corner of the globe – many of whom were formerly frustrated by the complexities of video calling software – Logitech Vid is delivering on the promise of video calling.”

The Logitech software now joins the company’s latest innovative offerings including the Webcam Pro 9000. The latter flaunts features like 720p HD local video-capture and Carl Zeiss optics. Finally, this software is also claimed to be a reliable source of high-quality video calling and is powered by the Logitech SightSpeed network.

The Logitech Vid Software’s free service is probably what did the trick for the software.