Germany-based OEM Linshof has revealed a new smartphone called the i8 and this handset is so unique in design, it’s hard to image that it’s an actual device and not some concept whipped up on Photoshop. The phone also has some pretty ambitions specs and an attractive price tag of around $380.

For the amount being asked, you get a phone that flaunts a drool-worth design and looks to be super slim. The Linshof i8 has a premium body which appears to be of metal construction, albeit that isn’t confirmed. The front panel flaunts a 5-inch 1080p display with extremely slim bezels, while the rear has a brushed textured finish. 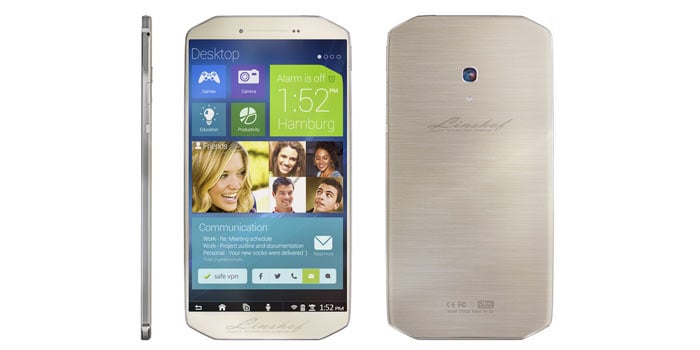 PhoneArena notes that the smartphone will be offered with either an IPS LCD panel or an AMOLED screen, depending on market. There are dual cameras on the exteriors as well, with a 13MP snapper occupying the rear and an 8MP shooter taking its place on the front.

On the inside, a 2.1GHz octa core processor does the heavy lifting with 3GB of high speed RAM. And for storage, there a total of 80GB of flash memory onboard which is quite the weird number. The company states that it has used dual memory modules, one 64GB and the other 16GB with high data speeds for apps. The phone also has a 3100mAh battery and it runs on Android 5.0 Lollipop with a custom UI layered on the top.

The Linshof i8 is scheduled to go on sale sometime during Q1 2015. The company will also be offering buyers the choice to ditch Android for a touch-based Linux platform which is currently in the early stages of development.