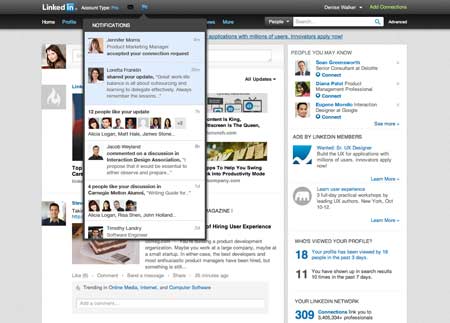 A popular professional networking site seems to have taken inspiration from its social counterpart in order to add the notifications feature to its site as well as refresh LinkedIn for Android and iOS apps. A couple of other attributes have also been introduced through the update and the company will soon allow users to edit their profiles from these mobile applications, says the official LinkedIn blog.

Android, iPhone and iPad users will be notified on the move, if their posts are liked or their invitations are accepted. Additionally, they will also receive a notification when someone visits their profile on this professional network. A flag, an inbox envelope icon or a red circle will appear on the homepage to let users know about new likes, comments, inMails and more.

“This new feature is just starting to roll out today, so it may take a few weeks for all members to see the flag appear at the top of your LinkedIn homepage. In the meantime, start sharing a professional update, like a relevant news article, or comment on what your connections are discussing. We’ll take care of the rest and make sure you’re notified when people take actions on your updates,” says Angela Yang through a post on the official LinkedIn blog.

Furthermore, company pages have been affixed to these applications as well. So subscribers can peruse over updates, news or job openings in the companies they follow. ‘Job listings’ and ‘jobs you may be interested in’ will also show up in the mobile stream, thanks to the latest update. And that’s not all, the iPad version of this app now understands 6 new languages including Korean, Spanish, Brazilian, German, French and Italian.

Updates for LinkedIn for iOS and Android have already been rolled out.