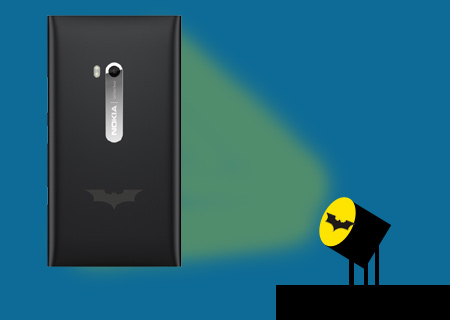 Those who didn’t manage to lay hands on The Dark Knight Rises Lumia 800 smartphone could try their luck on the limited edition Batman Nokia Lumia 900 handset. The device is expected to go live in the UK through Phones 4u ‘very shortly,’ says a report.

The guys over at Pocket-lint seem to have gotten somewhat of an official comment or two from Nokia regarding the launch of this limited edition smartphone. The device will be sprayed with a black finish over its polycarbonate form factor. On the handset’s lower-rear end, the company appears to have laser-engraved the Batman logo that flaunts a lighter hue from the rest of the body.

Apart from minor changes in the design, the Lumia 900 should continue to carry its existing specifications. For refresher’s sake, its holds a 1.4GHz processor and runs on the Windows Phone 7 Mango OS. Fitted within its 5.03-inch x 2.7-inch x 0.45-inch form factor, is a 4.3-inch AMOLED ClearBlack touchscreen proffering a resolution of 800 x 480 pixels and a Corning Gorilla Glass coating.

An 8MP camera with Carl Zeiss optics is allocated to the rear side, while a 1MP front camera takes its place just above the display for video calling purposes. Where battery life is concerned, the handset should deliver up to 7 hours of talktime, 300 hours of standby or 6.5 hours of video playback.

The limited edition Batman Nokia Lumia 900 release date should fall during the coming weeks for the UK, Germany, France and a few other countries in Europe. Price details for the handset are still under wraps.