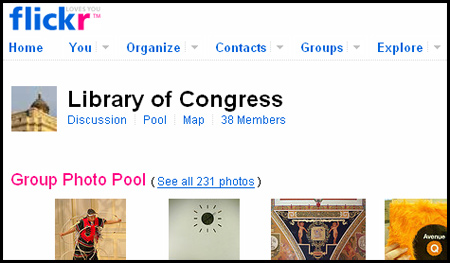 As part of this agreement, Flickr will be creating a new space on its site known as “The Commons”, which includes a rich database of photos from public collections and civic institutions.

According to Matt Raymond, the Library’s director of communications, “From the Library’s perspective, this pilot project is a statement about the power of the Web and user communities to help people better acquire information, knowledge and—most importantly—wisdom. One of our goals, frankly, is to learn as much as we can about that power simply through the process of making constructive use of it.”

“The real magic comes when the power of the Flickr community takes over. We want people to take, comment and make notes on the images just like any other Flickr photo, which will benefit not only the community but also the collections themselves,” he added.

George Oates, a designer at Flickr, blogged that The Commons is aimed at increasing the exposure of content now held in public collections throughout the world and providing a place for users to post content to add to the general knowledge about the photos.

In his blog post, Oates urged users to tag content added from the Library of Congress and other public collections that may soon be added, to make “something greater than the sum of its parts: an organic information system, derived of descriptive words and phrases made entirely from individual contributions.”

“There are about 20 million unique tags on Flickr today. They are the bread and butter of what makes our search work so beautifully. Simply by association, tags create emergent collections of works that reinforce meaning. What if we could lend this wonderful power to some of the huge reference collections around the world? Well … you can,” Oates noted.