Leaked images have a tendency being as blurry and worst quality as they can, but this latest one which happens to be of Google’s LG Nexus 5 (2015) or whatever it is going to be called, is just the opposite. The extremely clear picture gives us a look at its rear surface and all the hardware that will form part of this side of the phone.

The appearance of the device matches its 3D render that was leaked not too long ago. While that handset was showcased to have a black colored body, this new one here shows what the LG Nexus 5 (2015) will apparently look like in white.

The Nexus logo will still be staying horizontal on this year’s Android flagship phone from Google. The circular ring that you can spot right below the camera is supposedly meant to enclose a fingerprint scanner, which is not that big a surprise since most high-end devices these days are shipping with this feature and also because Android M provides native support for scanning your fingertips. 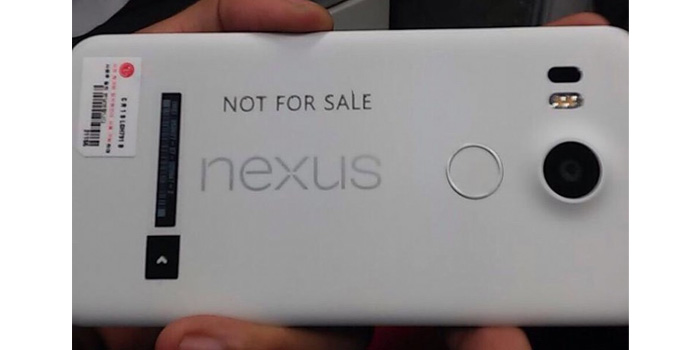 There’s a protruding camera onboard this handset; probably meaning that its makers wanted to keep its thickness very low. This sparks some fears in the minds of hardcore fans since low thickness usually translates into a smaller battery.

Also Read: LG’s Nexus 5 (2015) has all its specs leaked this time, price hinted as well

A dual LED flash can be seen sitting right beside the rear camera, but it’s the component that’s next to it that’s grabbing much attention. There’s a high possibility of this hardware being a laser autofocus sensor meant to provide extremely quick focusing abilities to the camera.

The LG Nexus 5 (2015) will apparently ship with a 5.2-inch display and a USB Type-C port when it’s released later this year. The image has leaked via famous YouTuber Marques ‘MKBHD’ Brownlee, but someone on Reddit has done some photoshopping to come up with a label-less version of the leaked handset and has even created a mockup of what it will look like in black.