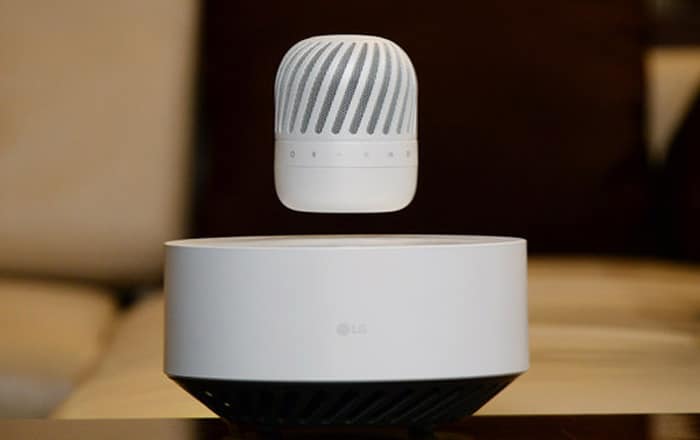 Devices which float in the air are no longer just made-up gadgets that can only be seen in the movies. LG’s announced a new portable Bluetooth speaker that looks straight out of a sci-fi epic.

LG notably isn’t the first company to have a go at hovering speakers, but it is likely the biggest manufacturer to do so. It plans to show off the Levitating Portable Speaker with model number PJ9 at CES 2017. The wireless product floats over a Levitation Station which houses powerful electromagnets to keep it fixed in mid-air.

The 360-degree omnidirectional Levitating Portable Speaker sports a striking turbine blade-inspired design and is capable of connecting to 2 Bluetooth devices at the same time. Dual Passive Radiator technology apparently helps reproduce flush mid-range tones and crisp highs when blasting out music. Deep bass is taken care of by the subwoofer embedded within the Levitation Station.

LG claims the PJ9 lasts for 10 hours at a stretch. Intriguingly, the brand says it’ll automatically land on the Levitation Station when it starts running out of power. The accessory will then start juicing up wirelessly on its own without interrupting playback, a dream feature for people who don’t want to bother about constantly charging their various gadgets.

The Levitating Portable Speaker even comes with IPX7 certification to enhance its ruggedness. The standard guarantees the device can survive dunks in water up to 1m for a maximum of 30 minutes. LG hasn’t revealed any price or availability details for the futuristic device as yet.