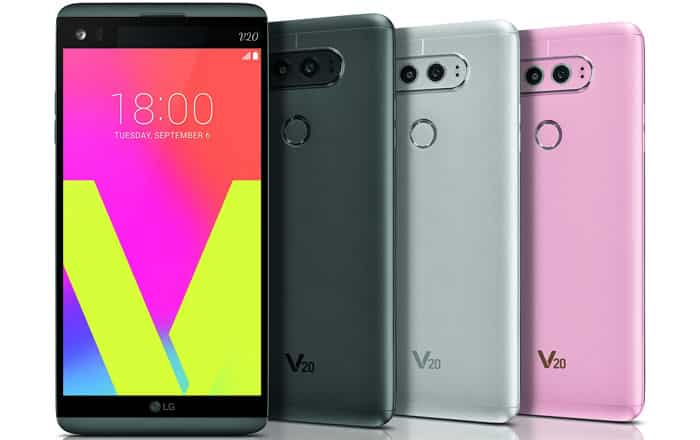 LG’s finally outed the V20 after teasing the phone’s capabilities for a while now, retaining the best of its predecessor hand-in-hand with a number of improvements. The Nougat-running flagship handset doesn’t have a price tag yet and will hit South Korea later this month.

In terms of style, the LG V20 looks more like the G5 than its previous variant, right down to the dual cameras on its back. It’s been carved out of lightweight aluminum and Silicone Polycarbonate for added protection from drops. In fact, the brand claims the device has passed the MIL-STD 810G Transit Drop Test which means it can withstand falls of up to 4 feet.

One of the biggest headline-grabbing aspects of the V20 is that it’s the first non-Nexus phone to run Android 7.0 Nougat. Moreover, the smartphone is also the first to sport Google’s In Apps feature which allows people to search for content from default apps like messages, in addition to user-installed applications.

LG’s kept the tiny second screen from the V10. The narrow strip showcases 50% bigger fonts this time round, possesses double the brightness, and carries a button to give consumers the power to enlarge alerts via the new Expandable Notifications tool. Audio prowess is still a priority, with the company equipping it with a 32-bit Hi-Fi Quad DAC, B&O PLAY enhanced sound, and an HD Audio Recorder.

As for its photography skills, the V20 flaunts a twin-snapper setup on its rear surface composed of an 8MP camera with a 135-degree wide-angle lens and a 16MP primary shooter with a 75-degree one. Highlights include Steady Record 2.0 for non-shaky videos, Hi-Fi video recording, Auto Shot for smiling selfies, and Hybrid Auto Focus which uses a combination of Laser Detection AF, PDAF and Contrast AF.

Here’s a neat overview of the specifications of the LG V20:

We’ll let you know as and when the LG V20 makes its way to international markets in the coming days.