LG.Philips LCD to Show its Latest 52 and 84-inch Multi-touch Displays and more, at CES 2008 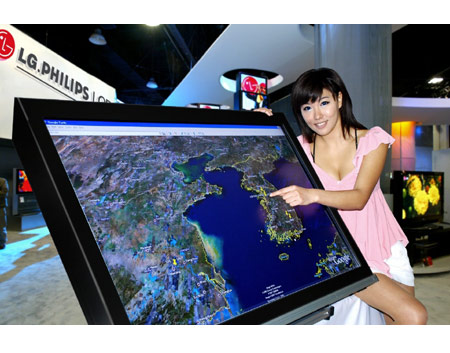 LG.Philips LCD is all set to welcome New Year 2008 with a line-up of five new exciting panels. The displays will be unveiled at the forthcoming CES 2008, scheduled to be held at the Las Vegas Convention Center (LVCC) from January 7 through 10, 2008. Below are the key details about each of them:

The all-new 84-inch Multi-vision Multi-touch LCD for Interactive Public Displays has been developed by joining four 42-inch panels in a two-by-two array. Having a screen bezel width of merely 15mm, it is 40 percent smaller than the average bezel. In addition, the 84-inch display also has full HD 1920 x 1080 resolution, an omni-directional 180-degree viewing angle and an amazing 500 cd/m2 brightness.

LG.Philips LCD’s 52-inch Multi-touch Screen meant for public and interactive displays is the world’s largest display and has the ability to recognize input from either a touch of a finger or more accurate writing instruments. With the help of an infrared image sensor, users get the ability to recognize two separate touch points as well as gestures. Incorporating a 90 Hz touch response time, 1920 x 1080 Full HD resolution and a light transmission rate of 95 to 100 percent, this display seems to be one-of-a-kind.

Next in line is the 47-Inch Triple View LCD, which is apparently the world’s largest and highest resolution triple view display that features Full HD 1920 x 1080 resolution. Apt for applications such as store directories and advertising at shopping malls, the display includes the ability to reproduce 1.07 billion colors along with a brightness of 250 nits. The light from the panel splits into separate paths, thus showing three entirely different images to people standing at different angles relative to the display.

The relatively normal 47-inch double-sided LCD that uses a single backlight is meant for public displays. Merely only 70 mm thick, the display is 30 percent thinner than the normal models, however its luminance of 500 nits equals that of regular panels.

And finally the 42-inch transflective display is apt for outdoor. Comprising of an awesome 1,500 cd/m2 luminance in outdoor light, this display enhances daytime readability to a great extent. Thanks to a special transflective technology, LG.Philips LCD has developed a backlight that greatly enhances the viewability of an LCD panel during anytime of the day.