As expected, LG has revealed its plans of launching the third generation L Series smartphones at the MWC 2014. So this basically means that the company will have a flagship smartphone and a fresh portfolio of mid-range as well as entry-level devices to showcase at the expo next week. What’s interesting is that the conglomerate has adopted a slightly different strategy for naming the upcoming handset.

The second generation series carried the number 2 (in roman numerals) for each phone. The LG L Series III, however, doesn’t. The new handsets comprise of the L40, L70 and L90. The first device is an entry-level one sporting basic features. It has a 3.5-inch 480 x 320p display, a 1.2GHz dual core processor, 4GB of memory, 512MB RAM, a 3MP camera, a 1700mAh or 1540mAh battery that varies based on location and 3G HSPA support. 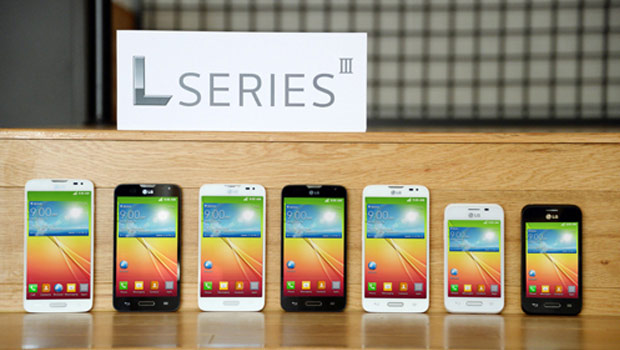 Android KitKat will be preloaded on the L40, making it one of the first devices with bear minimum specs to have the latest OS. Next up is the 4.5-inch L70 that has the same CPU and storage as its smaller sibling. Along with Android 4.4, the company has thrown in a WVGA IPS display, an 8MP or 5MP rear camera, a 2100mAh battery and 1GB of RAM. Last on the LG L Series III lineup is the L90.

This handset has a larger screen of 4.7 inches and it offers qHD visuals. The phone comes with a 1.2GHz quad core processor, an entire gigabyte of RAM, dual cameras, 8GB of storage and a 2540mAh battery. Each device in the LG L Series II is designed with delicate finishing and has a metallic frame. Additionally, they also come with Quick Window smart cover accessories.

We expect to see more details, especially availability information, on the LG L Series III surface at the MWC 2014 next week.