LG’s odd 4:3 aspect ratio smartphone series has been presented with a new member, the Vu 3, which is the third iteration to the lineup. The latest addition has a slightly larger screen compared to its predecessors’, and other high-end components, making it at par in performance with the newest flagships in the market.

The Vu 3 is the second smartphone in the company’s 2013 lineup to come without the Optimus branding. Design-wise, LG has opted for rounded edges and a similar appearance to that of its G2 flagship. The device has a physical home button on the front accompanied by a 5.2-inch 1280 x 960p HD+ IPS touchscreen. The 4:3 aspect ratio is said to deliver optimum readability for viewing eBooks and websites. 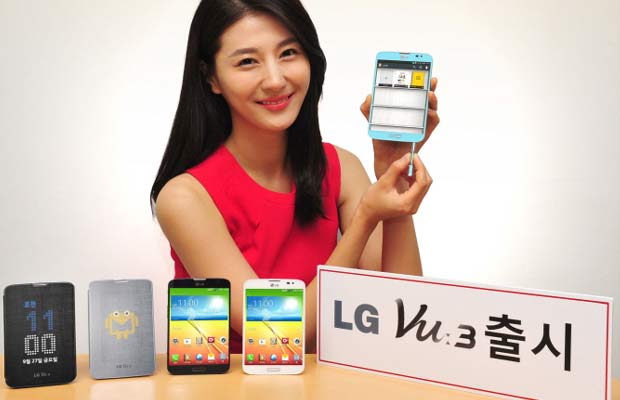 The device is accompanied by a rubber rhodium stylus which can be used for writing, drawing and other similar activities. The company has also designed a QuickView case for the Vu 3 which is made from translucent material allowing you to view certain information without opening the cover. Various themes can be set for this feature. As seen on the LG G2, Knock-on allows you to wake the phone by simply tapping twice on the screen.

LG has been quite scarce with the technical specifications, but what we do know is that the Qualcomm Snapdragon 800 processor will power it up. The handset will support LTE-A connectivity with speeds of up to 150Mbps. On the rear, a 13MP camera has been fitted with capability to capture high quality 24bit 192kHz audio.

No price details have been provided as yet, but the company notes that the LG Vu 3 will go on sale starting September 27 on SK Telecom, Korea Telecom and LG U+.