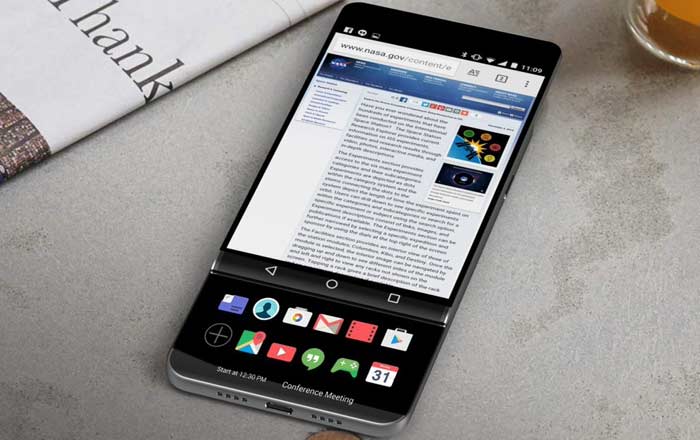 Rumors about the LG V30 are beginning to heat up what with the arrival of yet another leak dishing out details about the handset’s launch. The South Korean brand is apparently planning to show off its next major flagship at the IFA 2017 in Berlin.

The LG V30 could be unveiled on August 31, a day before the IFA 2017 is set to begin. If true, this marks the first time LG will be launching a flagship smartphone at the event. ETNews believes that this is a sign the firm is confident enough about the smartphone to unveil it on a global scale, much like its annual trips to the MWC to unveil its other flagship G series.

LG is apparently looking to differentiate the V30 from its predecessors by adopting an OLED panel with a bezel-free design, just like the G6. It could have a dual-camera system on the back and a second screen up front. This time round, the extra panel may just slide out from the bottom to serve as a keyboard or app shortcut.

The photo above illustrates this possibility. It was obtained by noted leakster Evan Blass who claims that the mockup was made by LG itself as part of Project Joan, its codename for the LG V30. He’s not sure if the smartphone is still going in that direction at the moment.

Other rumored specs include a 3200mAh battery, a Snapdragon 835 processor, a 3.5mm headphone jack, and Quad DAD audio technology. The first is said to be non-removable because LG is aiming to get IP68 certification against dust and water. The brand’s looking to launch it in 32GB, 64GB, and 128GB variants to give more options to consumers.