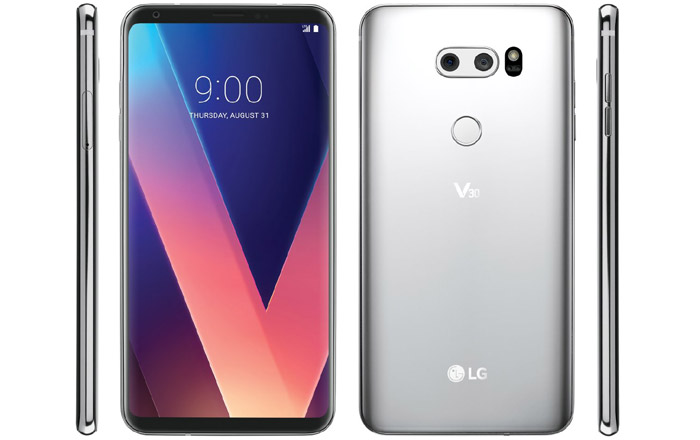 The LG V30 has gotten leaked in what is easily the clearest look at the smartphone till date. The image comes courtesy reliable tipster Evan Blass and looks similar to past renders, adding 2 layers of authenticity.

At first glance, it becomes immediately obvious that the LG V30 will sport smaller bezels than the G6. The latter’s thicker borders were seen as a disadvantage by many who preferred the Galaxy S8’s take on bezels. Now that objection has been eliminated, giving the Galaxy Note 8 some tough competition.

The V30’s gleaming metal body is pretty eye-catching, especially compared to the G6’s comparatively toned-down look. The leak also serves to confirm that LG has bid goodbye to its iconic second screen. The brand has instead chosen to replace it with a software toolbar called the Floating Bar.

Users can bring it forth by tapping on an arrow located at the side of the screen. It contains 4 shortcuts to frequently used functions. As for specs, the LG device is set to carry a 6-inch P-OLED QHD+ FullVision panel. Its body will be smaller than the V20’s in spite of the phablet-sized screen.

Blass doesn’t mention whether this is the standard version or its Plus variant. Both are expected to look similar, with the key differences being storage, audio technology, and wireless charging. The former is probably going to be priced at around KRW 800000 (approx $702 or Rs 45070) and the latter at KRW 1 million (roughly $878 or Rs 56330).