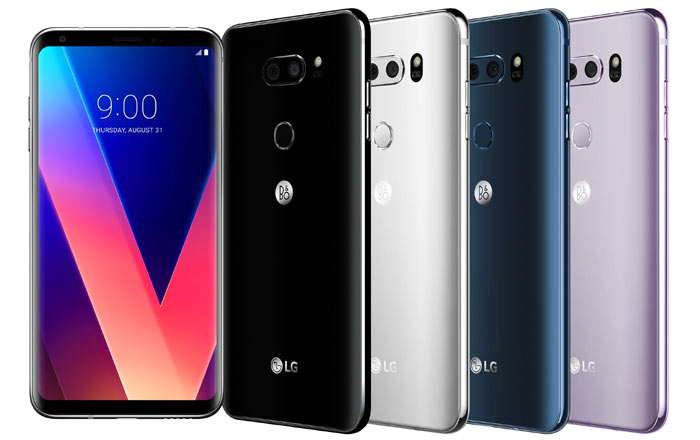 The LG V30 has finally gotten announced at the IFA 2017, arriving about a week after sworn rival Samsung released the Note 8. The similarities to the Galaxy S8’s Infinity Display can’t be denied, but the brand is trying to set its phone apart by appealing to power users who require advanced photography and audio features within a lightweight and comfortable-to-hold package.

LG’s gotten rid of the V series’ signature Second Screen, making up for the loss with a new Floating Bar that stores frequently used apps and an Always-on Display which allows fast access to Quick Tools and Music Player. The secondary screen had to be eliminated to bring about a nearly bezel-less 6-inch QHD+ 18:9 OLED FullVision panel.

The LG V30 goes big when it comes to its 16MP + 13MP dual cameras. The former boasts of an industry-first f/1.6 aperture to let in more light, a Crystal Clear Lens to ensure clearer images, OIS, EIS, and Hybrid Auto Focus. The latter is a 120-degree wide-angle lens which apparently has two-thirds less edge distortion than the V20.

There’s a new Cine Video mode which lets users apply a color grade prior to filming, with options including mystery, romantic comedy, summer blockbuster, and thriller. The device even supports LG-Cine Log to preserve a wide dynamic range and color gamut for more accurate footage. The tool additionally allows for the recording of video using log gamma curve.

As for images, users can choose professional photos from Graphy’s catalog and apply the snapshot’s aperture, ISO, and shutter speed to their own photo. Like its predecessors, the V30 caters to audiophiles with a Hi-Fi Quad DAC, B&O PLAY earphones, and MQA (Master Quality Authenticated) support for streaming high-resolution sound.

LG’s paid attention to its flagship smartphone’s durability as well, claiming that the phone has passed 14 categories of the MIL-STD-810G Transit Drop Test. Moreover, the phone has been equipped with Gorilla Glass 5 on its front and back and an H-Beam structure inside for tensile strength. A heat pipe and cooling pad is supposed to prevent overheating and IP68 certification ensures safety from dust and water.

The LG V30 is set to hit South Korea on September 21 and land in North America, Europe, Africa, Asia, and the Middle East following that. There’s also a 128GB of ROM-packing V30+ variant which will be sold in a limited number of markets.