LG has refreshed its Tab-Book series with an all-new addition and unlike the rest, it doesn’t run on Windows 8.1. The new model which goes by 11TA740-GA50K, features Android and is powered by a high-end Core i5 processor.

This is the first time we’re seeing Android as the default OS on a system with an Intel Core series processor. But it isn’t anything special as there are multiple builds of Google’s mobile OS which can be natively installed on x86 hardware. The new LG Tab-Book was made official by the company in Korea and it could end up being an exclusive launch as well. 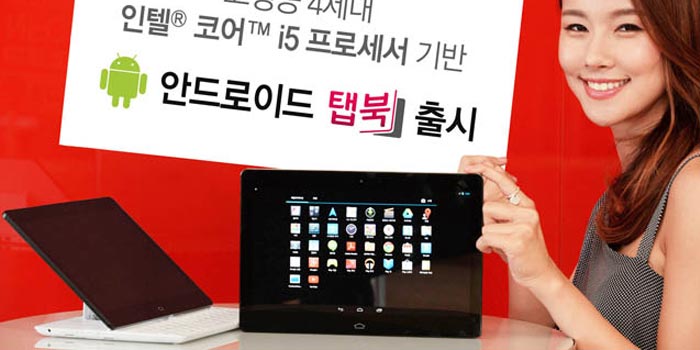 The 11TA740-GA50K model is quite similar to the Windows-powered Z160 where specifications are concerned. A fourth generation Haswell-based Core i5 4200U processor is onboard which is mostly found on Ultrabooks. The chip is a dual core one with a maximum clock speed of 2.6GHz and is accompanied by HD Graphics 4400.

Also see: How the owner of a burnt Samsung Galaxy S4 got offered a One M8 by HTC

These specs alone would make the device a monster in performance. The downside is that Android 4.2.2 Jelly Bean runs the show and there’s no mention of an update to KitKat. The same side-out keyboard design has been retained for this model allowing users to quickly switch from tablet mode into a laptop-like form factor.

There’s no word on the price or release date for the LG Tab-Book 11TA740-GA50K, but don’t expect it to sell for cheap.