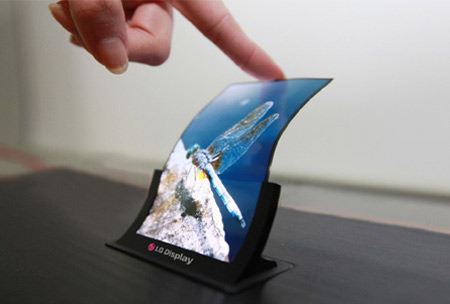 LG will be seen upping the ante for its competitors this week, even as it prepares to showcase a new 5 inched plastic OLED panel which is touted to be unbreakable and flexible. The South Korean technology giant’s Display division has chosen the SID 2013 event in Vancouver as the venue for this unveiling. At the same time, it will also throw some more light on its 55-inch curved OLED TV and some other technologies it’s been working on.

Not much has been disclosed about the unbreakable screen as yet, but we can safely say that if this demonstration is a successful one, the chances of it making its way into production models of the company’s smartphones are sure to increase. Although the possibility is a distant one at the moment, who doesn’t like a subtle glimpse of the future? Besides, the maker has highlighted that this unveiling comes at a time when smart devices are enjoying their hay days.

Apart from that, the increased risks of damage to these devices through drops, hits and other accidents has also been talked about. And there’s no denying that manufacturers are indeed paying heed to this issue. While Sony has already released its flagship Xperia Z and other phones with durability options, Samsung too is rumored to be prepping up a rugged version of its Galaxy S4 smartphone.

Furthermore, the 55-inch curved TV set which went up for pre-order recently in Korea will also been showcased at the event. Apart from that, 5-inch and 7-inch HD LCD panels bearing Oxide TFT technology should also be seen at the event. Said to be economic as well as less power consuming, these screens each have their own unique aspects. While the 5-inch display features just a 1mm bezel and is aimed at borderless smartphones, the 7-inch one bears a certain advanced touch function-embedded technology.