The LG Quad HD AH-IPS LCD panel has been announced and if the South Korean company is to be believed, this first of its kind display manages to render visuals in a resolution of 2560 x 1440 pixels. The mobile screen that provides a multi-touch real estate of 5.5 inches, has a pixel density of a whopping 538ppi which will surely give the OEM an edge over other smartphone manufacturers.

Unlike full HD displays, the panel in question should be able to project PC-version web pages without any image distortion. Potential users will even notice that it continues to deliver sharp text even when they zoom in. It goes without saying that the brand new screen squirts out clear images with accurate color reproduction and improved contrast and vividness. And it is said to have the ability to produce not only life like pictures, but also Blu-ray equivalent videos. The first ever smartphone panel to have a pixel density of 538ppi, measures merely 1.21mm in thickness and has an extremely thin bezel of 1.2 millimeters. 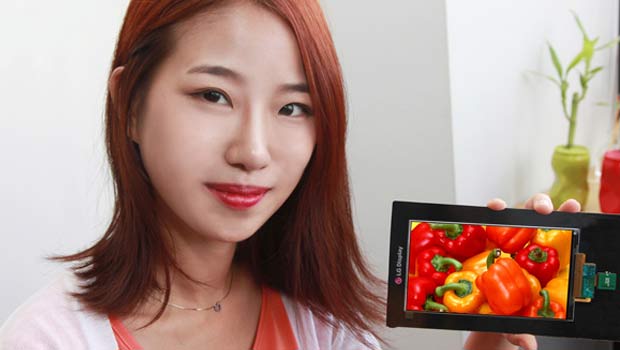 A larger aperture opening size and improved transmittance are just some of the other features of the Quad HD panel that has a brightness of 430nit. It is based on the Low Temperature Poly-Silicon substrate and this type of display is expected to dominate the market in the year 2014. A report by DisplaySearch has revealed that as many as 765million gadgets will be graced by such panels next year.

The manufacturer hasn’t announced a smartphone that is adorned with the LG Quad HD AH-IPS LCD panel as yet. It should be announced by the end of this year or in early 2014.