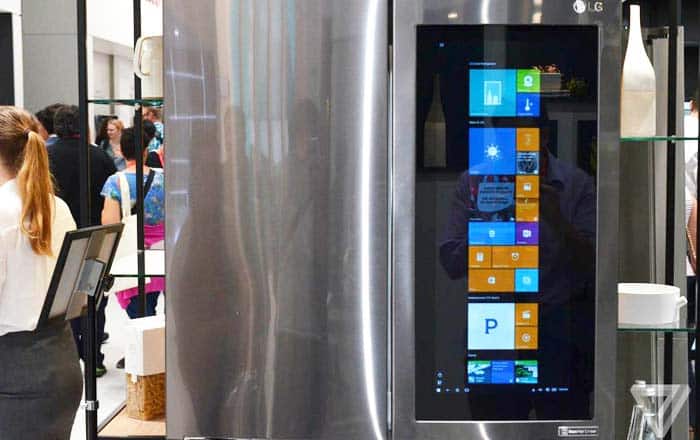 LG’s looking to make a splash at the IFA trade show in Berlin with a new Smart Instaview Door-in-Door Fridge which comes with a huge touchscreen. This isn’t just any ordinary display though, since the brand has decided to equip the appliance with a full-blown Windows 10 tablet.

LG isn’t the first manufacturer to go about making their fridges smarter. Samsung made headlines earlier this year at CES with its own 21.5-inch Tizen-based fridge. Not to be outdone, the former’s product measures a whopping 29-inch.

While the idea of owning a fridge which runs Windows 10 complete with specs like an Intel Atom processor and 2GB of RAM sounds bizarre, the Smart Instaview Door-in-Door has a number of tricks up its sleeve to make it more appealing. First-off, the OS allows you to download and run all kinds of apps like Edge so you can check out recipes or watch videos on YouTube.

Having the full power of Windows 10 at your fingertips also translates to the ability to play music through the in-built Bluetooth speakers and access to Cortana for voice commands. Secondly, LG has added some special wizardry to the panel so it can go semi-translucent, letting you actually view the contents of the fridge and place digital post-it notes to label items, a new-age take on an old-fashioned practice.

The LG Smart Instaview Door-in-Door Fridge doesn’t have a price tag or release date yet. It’ll probably come out later this year.