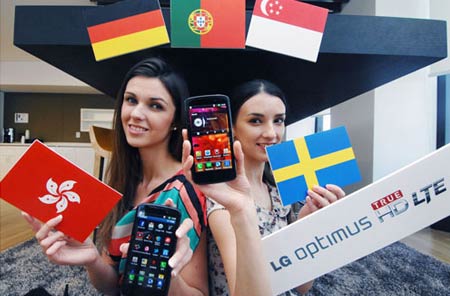 The all too familiar looking LG Optimus True HD LTE has been packing its bags in preparation of a Europe and Asia launch. The South Korean conglomerate has sketched out plans to launch the smartphone in Germany, Hong Kong, Portugal, Singapore and Sweden.

Since the LG handset debuted in Korea, it has made its way to other destinations covering Canada, Japan and the US. Stretched across its front panel is a 4.5-inch True HD IPS display churning out visuals in 1280 x 720p resolutions and in a 16:9 aspect ratio. For those who haven’t made the connection yet, that’s why LG has added ‘True HD’ to the LTE smartphone’s moniker. And another big hint in the name gives away the fact that it is capable of rubbing along with LTE networks.

“The mobile industry is evolving around LTE technology which has demonstrated its capability when it comes to speed, efficiency and reliability. With the Optimus True HD LTE, we want customers to understand that LTE isn’t just about the network and that all LTE phones are not alike,” expressed Dr. Jong-seok Park, President and CEO of LG Electronics Mobile Communications Company.

Flipping the phone onto its front should offer users a view of an 8MP camera fitted into the back panel. The bar form factor of the device hides a 1.5GHz dual core processor that powers it up. Apart from this, the company has emphasized that it ‘will receive’ an update to the Ice Cream Sandwich OS. Meaning users can probably look forward to snapping up the smartphone with Gingerbread, upon purchase.

The LG Optimus True HD LTE price hasn’t been given a mention. But fans can obviously expect the tags to change depending on the region in which it’s being sold.