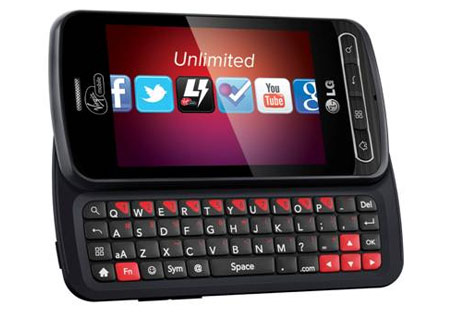 Almost on the brink of the next iPhone release, it sure seems to be raining mobile phones in the U.S., with the most recent announcement being that of the upcoming LG Optimus Slider via Virgin Mobile USA. Sliding into the mobile terrain with a full keyboard that’s easy to use, this Android-powered smartphone has been built specifically for social networking addicts.

Equipped with a 3.2” touchscreen for seamless connectivity, the slide-out QWERTY keyboard will come more than handy for social enthusiasts. The bright screen is accompanied by hassle-free internet connectivity courtesy of 3G Sprint network support. Powered by Android 2.3, users can also reach out to the ever-increasing Android Market for apps and games. Incorporated by a 3.2MP camera, the LG Optimus Slider offers microSD support up to 32GB and is Bluetooth 3.0 capable.

“With the new LG Optimus Slider we’re bringing our customers an updated operating system and slide-out keyboard,” commented Mark Lederman, Business Line director, Virgin Mobile USA. “According to NPD Group, year-over-year preference for a touchscreen has tripled among prepaid buyers, and 21 percent[1] of all customers say that having a QWERTY keyboard is a motivating factor in making a purchase. Coupled with the popularity we’ve seen on the LG Optimus V we’re looking forward to bringing this fresh option to Virgin Mobile.”

The LG Optimus Slider is slated to hit Virgin Mobile USA for $199.99 around October 17, 2011. It’s availability at Best Buy and Radioshack stores is October 31 while Target and Sprint stores can expect it to reach on November 6 and November 13 respectively. In addition to this phone, Virgin also reveals that the earlier announcement of lowering throughput speeds for Beyond Talk users who attain 2.5GB of data usage in their existing monthly cycle has been pushed back to 2012.