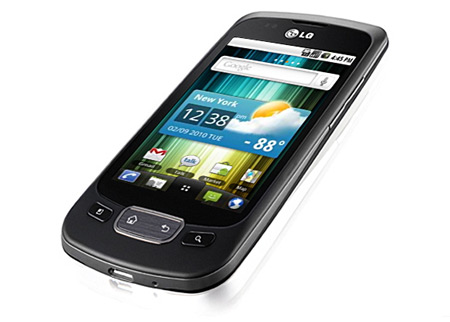 We have been waiting to taste the Frozen Yogurt stirred into mobile devices for some time now. To our delight, the LG Optimus One P500 hopped out of LG’s closet directly onto our review desks. This successor to the Optimus GT450 has lots to talk about. Well, those who think successors take the device a step further than its predecessor could be in for a pleasant surprise as the P500 walks a mile. Besides the Android 2.2, it ropes in several advanced attributes to lay your hands on.

Although there is nothing new or different about its looks, design wise, the LG Optimus One P500 is quite smart looking sturdy device. Besides the screen and metallic uneven rim, it is completely coated in a rubberized texture. Parts of the rim form the main on/off switch and volume controls integrated on the upper and right edge, respectively. The microphone and USB port are embedded on the lower edge while the 3.5mm jack goes next to the main power button.

The 3.2-inch touchscreen display takes on the front side while a row of three buttons lay just below it while the speakers have been outfitted just above the screen. The three buttons include Menu and Search located on the left and right side while a large button accommodating both Home and Back is placed in the middle. This large button is outlined with steel and painted in brushed gray. One may notice the proximity sensor while the front facing camera and ambient light sensor are given a miss. The back side of the smartphone infuses a 3 megapixel camera and ‘with Google’ has been imprinted on its back. As we started using the P500, we first noticed the good tactile feedback delivered by the buttons. Moreover, the phone was comfortable to grip as well as pocket.

The screen quality of the 3.2-inch touchscreen display came across crisp and clear. The viewing experience was good, owing to the well reproduced colors, be it images, videos, web browsing or more. The screen turned out quite responsive to our touch. While out in sunlight, the screen did fade off to a great extent.

LG has done a great job by incorporating the LG Optimus One P500 with Android 2.2 Froyo, considering the various smartphones in similar or higher price range. You have a choice of five homescreens which can be further extended to seven. We could also lay our hands on some useful widgets that come pre-loaded. The company has loaded some bright and vivid wallpapers alongside some decently performing Live Wallpapers. The user interface is quite straight-forward with a pull up Menu at the lower center with shortcuts to Call, Phonebook, Messaging and Browser on both sides. Just below the Menu, you will find a section entitled Downloads for accessing all downloaded applications.

LG brings in some customized applications for the Indian audiences such as Bollywoodji, Indian Music and more. We could also get our hands rather fingers on features such as Layar, News and Weather, Dictionary and PhotoFunia. The clock app which comes with several added functions appear to be a good inclusion. You can also use the phone as a clock while the screen dims/ brightens with a single touch. Furthermore, the Car Home feature let us customize the most used functions and assign them with huge icons. 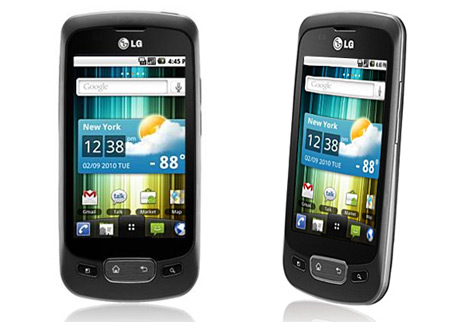 The LG Optimus One P500 is powered by 600MHz processor and 512MB RAM. Yes, one may notice the mere 600MHZ processor to be quite meager. It brought in a slightly sluggish performance at several instances. However, the overall performance delivered by the phone was decent. The browser did lag at a couple of instances but the loading speed otherwise was quick. So, should we say the inclusion of Froyo helps in the elevated performance level of the smartphone while the processor almost limited the device from offering a smooth performance. Moreover, Froyo that is believed to bring in Adobe Flash 10.1 didn’t choose to be a part of this device, probably owing to the low capability of the processor. While using the Gallery, it came across pretty sluggish.

The LG Optimus One P500 smartphone features the FM radio application but minus the support for RDS. The phone equips a 3 megapixel camera that is capable of taking quick decent images while the video recording ability is also fairly good. The call reception and call quality turned out to be quite fine. The handsfree option also emitted loud and clear voices. The smartphone comes with support for GPS, Wi-Fi 802.11b/g and Bluetooth v2.1. The keyboards packed into the device include the standard one from LG and another from Android. Seen in most of the phones, typing in the landscape mode is much better than the portrait mode.

The camera features auto focus but hasn’t included flash. One will notice that the missing dedicated physical camera button so even to click those swanky snapshots, one will have to use the on-screen touch button. On taking a picture, we could instantly set it as a contact icon or wallpaper. We could also quickly share the picture through social networking and other sites. The on-screen slider lets you switch from camera to recording mode.

The music player embedded into the P500 does its job pretty well. The sound quality is decent while it successfully emits loud and clear tunes. Moreover, the loudspeaker has been fitted aptly on the front which again helps to grove to tunes even if the device is placed on a desk or couch. The included earphones are pretty decent and we also tried using other earphones, either ways the music quality was maintained good. Recently, we got our hands on the latest Motorola Milestone that gave a miss to DivX and Xvid file support. The LG P500 is priced way low and does support these file formats. We enjoyed watching YouTube videos and some of our favorite sitcoms. The phone equips a 1500 mAh Li-Ion battery and with above average usage it manages to run for about a day.

LG has sculpted the device with a simple yet good looking design. Moreover, the device exhibits a good built-quality.

The inclusion of Android 2.2 is appreciable. It has helped enhance the overall device performance level to a great extent.

The audio quality of the phone is maintained pretty well.

Compared to several other phones, this feature-loaded phone bundled with decent performance comes with an affordable mid-range price tag.

LG could have included a better processor which would help eliminate the sluggish performance at several instances.

Some attributes like camera flash, indication sensor and Adobe flash are given a miss.

The manufacturer could have also integrated a higher resolution camera.

In a nutshell, we think LG has done a great job with the Optimus One. Now, we know some aforementioned attributes go missing while performance could have been better. However, at a price of Rs. 12,000, the Android 2.2 smartphone packs in much more. The LG P500 Optimus One could get a good rating of 9 on 10 from us.